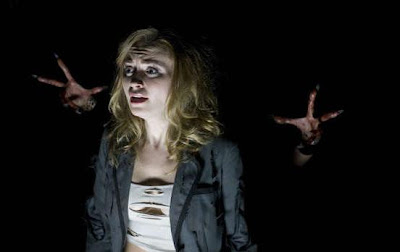 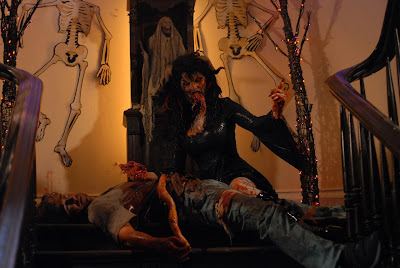 When the shindig is prematurely shut down by the cops, Angela and a group of six friends find themselves locked in the grounds and decide to sit it out 'til morning (couldn't they just have climbed the fence?!). However, a morbid discovery in the basement reawakens the voodoo curse which has laid dormant in the walls for 85years - oh, bugger! How many of the teens will evade the “demons too bad-ass even for hell's rules” and survive until first light?

For a B-movie of this calibre, the demonic special effects are actually surprisingly decent, not that the crew seem to have any faith in their creations – the screen is often too dark to distinguish any details. They're hideous and grotesque in an over-the-top Evil Dead vein, which works well with the tongue-in-cheek tone (at one point a possessed lovely pushes a lipstick into her nipple, only for it to drop out of her vagina in a flood of blood). It's just a shame that it takes so long for the horror to kick in, as it often feels like director Gierasch is 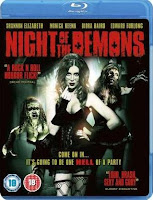 more interested in sex than scares, giving the film a pervading air of tackiness.

Former “John Connor” Edward Furlong plays small time drug peddler Colin, a role you get the impression was crafted with him in mind. The actor's personal battles with substance addiction have long tarnished his child star glory days, and he looks seriously out of shape here – it's not hard to see why his on-screen ex, Maddi (Keena), left him, and it's nigh impossible to give a fuck about the fate of such a scummy deadbeat low-life.


In a CR@B Shell: A predictably puerile hardcore horror movie with SFX far above its station. Night of the Demons 2010 could have been a schlocky camp treat, but it missed a trick with too much emphasis on sordid sexualisation and degenerate characterisation. Good for an inebriated late night viewing only.
aaaaa
Created by ~ CR@B Howard ~ at 03:53