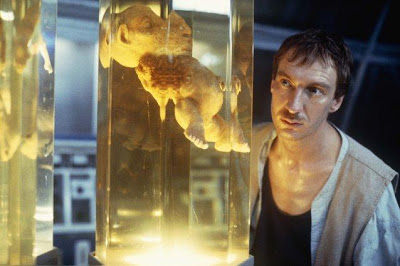 [SPOILERS] In my July review of the 1977 Don Taylor directed adap of H. G. Wells’ philosophically-driven sci-fi horror story (which you can read HERE) I confessed to having a far fonder remembrance of this highly criticized ‘90s realisation than the less-than-stellar general consensus. For the record, having now re-watched the film on DVD, I would like to unequivocally retract my statement, for The Island of Dr. Moreau (1996) is utter horseshit.

Frankly, it’s a miracle the film ever got completed: The original director was fired, an egotistical Val Kilmer curiously requested to have his role cut in half (and thus was given a different character to portray), replacement director John Frankenheimer brought in new screenwriters to drastically alter the direction of the film midway through production, he clashed with the difficult cast who lost all motivation to learn their lines and David Thewlis (hired late in the day as the second replacement for the role vacated by Kilmer) ended up rewriting his character's lines himself!

You have to wonder whether it wouldn’t have been beneficial to close down production to give the clearly very talented cast and crew time to iron out the creases, fix the film’s very palpable issues and come back to the table re-energised and with a fresh perspective. But they didn’t (aside from a meagre week and a half hiatus to completely rewrite the whole damn thing!) and its troubles shine through in a bizarre and embarrassing final product. Why did I ever think this mess was acceptable??! 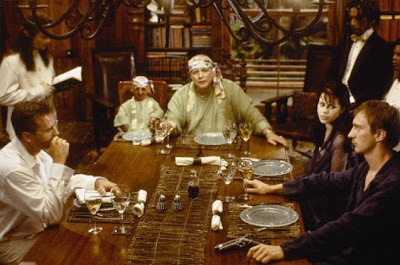 Brit thesp Thewlis (best known at the time for fab fantasy Dragonheart) is the only actor to escape with a modicum of integrity, but then, in the everyman role as “rescued” aircraft survivor Edward Douglas, he is the only character with a relatable logic. Basically, he's the only character who isn’t utterly insane. Hollywood legend Marlon Brando portrays Moreau as a complete fruitcake, his face caked in white powder, rambling whimsical bullshit in all manner of mad hats and tent-like dresses with a "Mini Me" sidekick (de la Rosa) mimicking his every movement! Isolation and obsession over his goal of gene-splicing man and beast to create a “divine human” may have pushed him to the edge of his wits but I had serious trouble in believing this self-proclaimed messiah had a scientifically-capable bone in his bulky body.

Kilmer's role as the doc's assistant/lackey is an odd one. Montgomery's intensity when evading Edward's early questioning is so tense it verges on uneasy; there's a darkness brewing beneath his chiselled exterior which is emphatically shattered when he starts theatrically impersonating his mentor, dressing like a freak and squeaking like a hyperactive child. I can only assume this near-schizophrenic personality transplant was a result of the numerous script rewrites by numerous scribes, because I'm otherwise stumped as to wear this surreal alter ego came from!

Plot-wise the film keeps loosely to Wells' novel, but the pacing squanders any trepidation in the horror. Douglas has barely arrived on the lush tropical paradise before Montgomery locks him in his room. Suspicions are raised, naturally, but within five minutes Douglas has picked the lock, wandered unknowingly into Moreau's “manimal” laboratory, alerted the island's unnatural natives that he's in on their ungodly abominations and gone on the run with Moreau's “pussycat” of a daughter, Aissa (Balk, playing up her undefinably obscure nature) – and this is all within the first 20minutes! 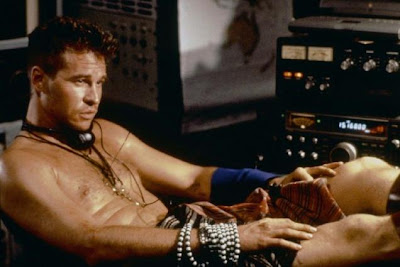 Naturally, Douglas is appalled by Moreau's experiments; the manufacturing of a bestial race of humanoids who are regularly drugged to stop them regressing back to their animalistic ways and brainwashed into obeying humane rules of society, as recited by Sayer of the Law (Perlman; noticeable even under the prosphetics). But when rules are broken by those in a position of power and the beasts learn how to avoid Moreau's shock treatment therapy, it isn't long before the deluded scientist has a revolution on his hands – a particularly bloody revolution which far too quickly sees the main characters killed off (Brando in particular is given short shift with regards to screen time) and chaos reign on this isolated isle.

As he makes his long-awaited escape on a crudely designed raft, Douglas – in only his third narration over the entire running time – "profoundly" compares the beasts regression into violence to mankind's more anarchic impulses, with low-def footage of real life brawls and riots spliced into scenes of the character's sail into the sunset. As much as I criticized the 1977 adap for not having a message of its own to impart, I found this lame attempt to be a clumsy stab at modernising Wells' meaning and an awkward end to a film which rarely sat comfortably with me at the best of times.

I don't tend to get bogged down in the technicalities of picture quality and the like at The CR@B Shack; I'm far more interested in the film's content than the widescreen ratio, the Dolby decimals and all that ish. However, I have to make an exception with this subpar EiV release which is so noticeable grainy that I fear it was simply ported over from the ancient VHS. At one point a phantom blue line intersects the screen which is clearly an imperfection they haven't bothered sorting! I realise the film bombed so they probably saw no financial benefit in spending more money on a sparkly new transfer, but this kind of shoddy treatment is unacceptable in our hi-def age, particularly when Stan Winston's creature effects are the sole reason to watch this monstrosity in the first place.


In a CR@B Shell: Tacky, unpolished and laughable: a mad scientist hasn't only upset the balance of nature, he's upset me, too! Making a mockery of a talented cast, first rate source material and spectacular creature designs, it's well documented where it all went wrong on The Island of Dr. Moreau – but how did it ever come to this?!
aaaaa
Created by ~ CR@B Howard ~ at 14:56