What Makes a Manimal? 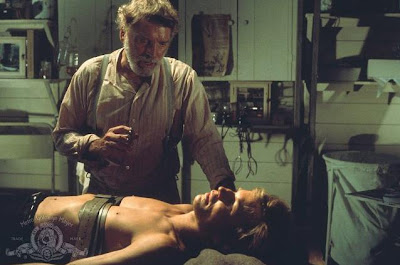 I had actually ordered the much-detracted Marlon Brando-starring 1996 remake – a film I never hated as much as the general consensus yet I hadn't actually seen since I last watched my now obsolete (well, in my house at least) VHS copy waaaay back in the day. When this earlier adap of H.G. Wells' sci-fi allegory of man's overly controlling attitude towards nature arrived in error (no doubt due to its lack of popularity, the newer film is darn hard to obtain, while this '77 version was granted a 2008 Optimum re-release), I decided to give it a look-see nonetheless.

Michael York – exasperatingly, a man I will evermore regard as Basil Exposition from Austin Powers – plays the re-named protagonist Andrew Braddock, washed ashore on an exotic island after surviving the sinking of his ship. Taken in by the tropical isle's sole household, Andrew becomes a guest of the scientist Dr. Moreau (Lancaster), a brilliant and determined man who conducts his radical research with the help of an associate, Montgomery (Davenport), and a slew of Neanderthalic servants native to the island.

As Braddock awaits the next cargo ship to hitch a ride home, he begins to learn more about Moreau's unorthodox experiments; inhumane experiments which tamper with the untamperable. Convinced he can create a race of fully sentient animal/human hybrids who will live in a “civilised” society and abide by a set of laws much like man does, Moreau plays God and threatens to turn this lush jungle paradise into a sinister and ugly living hell. 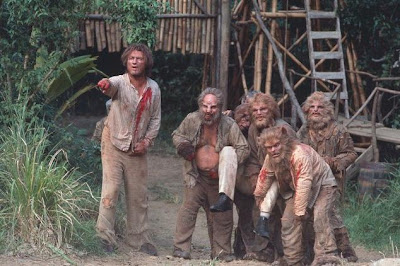 With a concept which drips “exotic”, "perverse" and “bizarre” from every pore, I was disappointed that this seventies incarnation was a rather flat and dispassionate depiction. Lancaster's Moreau may be visually akin to his prose namesake (something Brando's outlandish reinvention certainly wasn't), but he was far too calm and blasé for a man so utterly devoted to a cause that he is blind to reason. I never believed that he truly believed in his monstrous vision, and I likewise failed to sense a strong-enough objection from York's ostensibly outraged Braddock.

Furthermore, the make-up and creature effects – while undeniably impressive for their time – failed to really sell the atrocious aspect of Moreau's Frankenstein hybrids. The pack of communicative man-beasts, led by the creature known as Sayer of the Law (Basehart), are too pretty and cuddly to truly sway the argument against meddling with the codes of life. Some may rebel, true, but that is also true of humanity – where are the abhorrent freaks and hideously deformed trial runs which would reinforce the abortion of such practise? What we see here are minor variations on designs from The Planet of the Apes – and Charlton Heston snogged one of those!

I was left with the lamentable impression that while H. G. Wells wrote The Island of Dr. Moreau with a grand philosophical message to impart to his audience – a message both capturing the zeitgeist of the technologically-naive-yet-scientifically-curious late nineteenth century and concurrently timeless due to its intrinsic interrogation of what makes a man – this 1977 film was made simply because the filmmakers thought it would look totally wizard to have actors don animal masks post-Apes and not because they had an interesting argument to supplant or support Wells' wise words.


In a CR@B Shell: A shallow and toothless splicing of a revolutionary concept watered down by a lack of passion for the argument, The Island of Dr Moreau 1977 is watchable enough fantasy fare (and it certainly isn't the most despised of the novel's adaptations), but “middling” still doesn't do justice to such a powerful and prototypic prose parable.
aaaaa
Created by ~ CR@B Howard ~ at 03:28