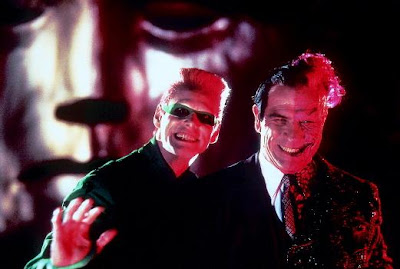 Congratulations to Ian Montgomery for deciphering the correct answer to my prior-posted riddle (reacquaint yourselves HERE); alas, I've no prize to give away except the pride for being right. The rather obvious answer was, of course, Batman Forever, and my microcosmic brain-teaser ushers in the second in my sporadic and unchronological blitz through Bat flicks old and new which I began last month with Batman & Robin (read my long-but-fair review HERE, if you dare!).

The second sequel to Tim Burton’s 1989 gothic big screen introduction, Forever is unofficially regarded as the beginning of the end of the first anthology of Bat-busters: Burton was reduced to producer and Joel Schumacher brought in as director because studio heads at Warner Bros. were concerned that 1992’s Returns was too dark and the mood needed lightening (a decision they thoroughly regretted some two years later when B&R’s dire reception lead to the canning of proposed fifth film Batman Triumphant).

Previous lead Michael Keaton (wisely) jumped ship and Val Kilmer was brought in – without reading the script in must be noted, leading to many an on-set conflict and the need to replace him for B&R – as the billionaire with a penchant for violent do-gooding. Despite playing Harvey Dent in Batman, Billy Dee Williams wasn’t even considered for the role of the disfigured D.A. “Two Face” here, the dubious honour instead going to Tommy Lee Jones. Michael Gough as butler Alfred and Pat Hingle as Commissioner Gordon returned as reassurance that we are still in the same diegetic universe. 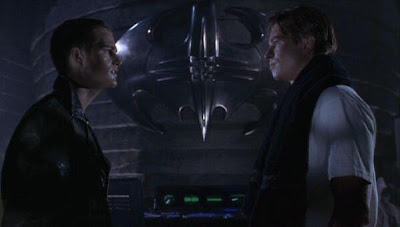 Prior to my rewatching of Batman & Robin, I did actually attempt to watch Forever first, sticking on the disc one evening in the hope of rekindling my childhood love of the film. I say attempt because I didn’t even get beyond eccentric inventor Edward Nygma’s (Jim Carrey) brain-draining murder of his boss, Fred Stickley (Ed Begley Jnr.), before my irritation reached fever pitch and I turned it off. The juxtaposition between moody and mad just didn’t sit well with me – at least B&R knew it was camp frivolity and never attempted to be anything else, whereas I found Forever to be awkwardly stuck between darkness and lighthearted.

Last week, however, I prepared myself and made it all the way through. In fact, I re-evaluated my exasperation because I realised how ironically apt it is that a film which deals with a menagerie of duplicitous and delusional wack-jobs is indeed a schizophrenic beast itself. “Two Face” is the literal visualisation of this juxtaposition, but Edward Nygma is also a genius with an unpredictably psychotic alter ego in “The Riddler”, and Bruce Wayne himself is a respected businessman who plays vigilante superhero dressed as a giant Bat. It’s no wonder a psychologist (Kidman's Dr. Chase Meridian) is playing the love interest with all these dual natures running rampant!

Fans bemoaned the bringing in of orphan Dick Grayson, AKA. sidekick Robin (Chris O’Donnell) – particularly because O’Donnell was too old for the “Boy Wonder” role – but I think this was handled well, even if it could be argued that Batman works better alone and doesn’t need a kid to assist him! The circus-based murder of Dick’s family at the hands of “Two Face” nicely mirrored Bruce’s pain of watching his own parent’s being shot down, while dressing the Flying Grayson’s in the same garish outfit which the camp 60’s TV version of Robin donned was a neat little in-joke (so too the tongue-in-cheek line “Holey rusted metal, Batman!”). 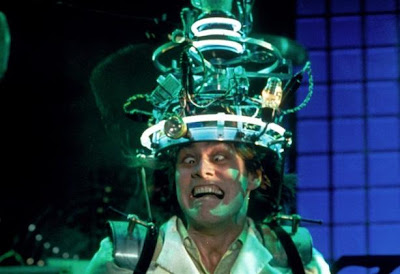 While the age-old movie complaint of “How the hell could these people afford all this equipment, costumes and interior renovations?!” does diminish the believability of The Riddler’s elaborate plan to drain Gotham’s brain-power and harness it for himself using his hi-tech Nymatech headgear (seriously, the giant construction and climactic island locale just appeared out of nowhere, already constructed and fully operational), but a number of vast script alterations mid-production did cut the film from a bum-numbing 2hours 40mins to the 121minute mark, so it is likely that a lot of exposition was lost in the chop. 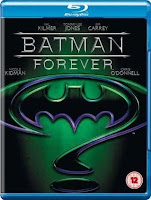 Whether Joel Schumacher’s fabled Director’s Cut (missing from this otherwise decently thorough Blu-ray set) would successfully smooth over the jolts in tone (quipping one liners one minute to mournful moody reflection the next) remains to be seen, but what we are left with isn’t a complete shambles, it just fails to hit the heights of Burton’s pitch-black predecessors while slowly ushering in the toyetic exuberance which temporarily killed off the franchise in a blaze of neon inanity.


In a CR@B Shell: Uneven and dualistic in tone, Batman Forever is neither spectacular nor unwatchable (provided you’re prepared for the change in direction), but it is often awkward in its uncertainty of how sinister or zany to be – a flaw which is just as much the studio’s fault as it is Schumacher’s.
aaaaa
Created by ~ CR@B Howard ~ at 11:52