Beauty and the Freak 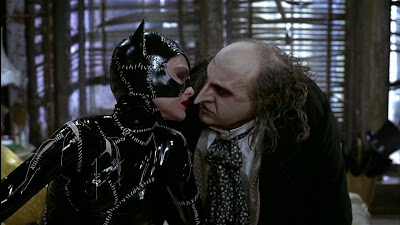 Regarded – for as long as memory serves – as my favourite of the six Batman motion pictures to date (yeah, I'd even go so far as to place it above Christopher Nolan's efforts), 1992's first sequel, Returns, did little to lessen my preference on a recent Blu-ray re-watch. The snow-steeped, washed out Gotham backdrop and Christmas setting perfectly juxtapose the pitch black plot which is so dark it's sinister – but nevertheless a Bat-load of macabre fun, too.

Favouring a gothic fairytale introduction for the film's iconic dual foes – deformed, sewer-raised “The Penguin” (DeVito) and murdered temptress “Catwoman” (Pfeiffer) – to a Batman-powered narrative, it is interesting to note that Bruce Wayne (Keaton) barely features in the opening 30minutes, merely watching from the sideline of his dank Batcave HQ as the concrete metropolis overhead is ambushed by corruption, madness and anarchy during a season of supposed goodwill.

Michael Beetlejuice Keaton, nevertheless, is superb in both lead roles, endowing the Dark Knight with steely menace while softening the resolve to a more humane (yet still astute) businessman when playing Bruce Wayne. He treds the line between reflective mourning and enterprising respect flawlessly. 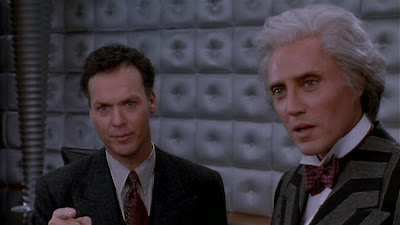 It's hard to believe that a woman as attractive as Michelle Pfeiffer could be so meek and malleable as downtrodden plain Jane secretary Selina Kyle, but she's every inch the feisty bitch as the resurrected leather-clad revolutionary. Christopher Walken, as her shameless and sinful boss Max Schreck, is an off the wall pantomime villain as the silver-haired manipulative schemer who the public blindly believes to be a saviour to their city. It's refreshing to see a comic book film depict a “real world” miscreant who doesn't don a disguise to carry out his underhand bidding.

But the star of the show, unquestionably, is Danny DeVito who truly is orphaned mutant Oswald Cobblepot. Thanks to some ingenious make up design which accentuates his shallow eyes, beaked nose, squat, waddling form and flippered limbs he really is a slimy, grotesque creation who gets under your skin – none more so than when he holds a pitying Gotham in the palm of his flipper and is persuaded by Max to run for Mayor. The scene in which he jumps a sycophantic do-gooder and bites his nose after feasting on a rotting fish is nauseatingly gleeful. 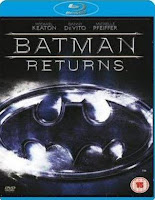 But despite wallowing in darkness, Tim Burton's eerie sequel is still intrinsically a comic book adaptation, albeit it one for an older audience than Joel Schumacher's latter goofiness (Batman Forever and Batman & Robin). The Penguin's kooky arsenal of dangerous umbrellas, his army of aquatic birds and circus misfits, the Batmobile's novel solution to dead-ends and Selina Kyle's supernatural personality transplant after being nibbled back to life by the animals who gave her more time than humanity ever did, are all testament to Returns' kooky cartoon quality which never falls into the trap of camp ridiculousness which eventually derailed the franchise.


In a CR@B Shell: The Dark Knight returns in a back seat role to his powerhouse enemies. But then the shadows are where Batman works best and his lack of screen time is in no way an indication of weakness. A trio of strong headliners, a leftfield maestro in Walken and a stylistically disorientating locale help lift this nihilistic scarytale into a rollicking and high-flying comic book cape-r.
aaaaa
Created by ~ CR@B Howard ~ at 12:49