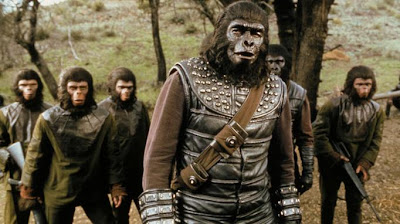 Generally, successful franchises which span multiple box office hits find that with each successive entry their budget inflates as technology becomes more advanced – not to mention cheaper to utilise – leading to glossier and more aesthetically pleasing (if not necessary better) final products. Battle for the Planet of the Apes – the fifth entry in the topsy-turvey sci-fi saga – does not follow this trend. A far smaller budget means a less stellar cast and compromises in special effects which, sadly, diminish the over-all effect of what would become the last theatrical release before the concept transferred to the small screen.

The most obvious drop in quality is the cheap-looking gorilla masks, highlighted all the more because bitter, human-hating military captain Aldo (Akins) has so much screen time as rival to ape “king” Caesar's (McDowall) crown. Battle picks up many years after the war which followed the simian revolt at Conquest's crucial cliffhanger climax. A nuclear detonation has reduced New York City to a skeletal wasteland with radioactive residue, leaving it uninhabitable (a nifty foreshadowing of the Forbidden Zone which Taylor and Brent found themselves lost in in the classic original and first sequel Beneath).

A smattering of the conquered humans – including brother to Conquest's chimp sympathiser, MacDonald (Stoker) and school teacher Abe (Keen) – are welcomed into the emerging Ape City to live (although not quite as equals, the cause of much consternation), while a reconnaissance mission by MacDonald, Caesar and orangutan wise-man Virgil (Williams) to gather recorded intel of Caesar's long-dead parents Zira and Cornelius (footage recycled from Escape) reveals a quarantined colony of mutated, radiation-poisoned human survivors living underground. As much as I couldn't abide the mutant sub-plot in Battle, further establishing the cult was a welcome attempt at rectifying a mistep.

Led by returning character Governer Kolp (Darden), the mutant dwellers see Caesar's trespassing in their colony as an act of war, and a ragtag force of gun-totting maniacs invade the divided ape community, leading to the eponymous battle – but how will the apes fair with Aldo caging-up the amiable humans and causing a rift in the ranks by injuring Caesar's child, Cornelius Jnr. (Porter), after the young ape overheard the gorilla's insidious plan to overthrow his passive leader? Will the apes stand united or fall divided?

The DVD cut I watched was, I have since discovered, severely edited. The US Blu-ray apparently rectifies this by using the definitive version, whereas the UK release, bizarrely, doesn't, instead including the additional footage as deleted scenes. At just 83mins, Battle is simply far too short (despite being the same length as its far superior predecessor) and its pacing does not help; whizzing by with very little of substance happening prior to the climatic fight. The first five minutes is wasted with overlong recaps of all previous entries, and a framing device confirming that the future is not set in stone features “The Great Lawgiver” (Huston), an oranutan who reads from the secret scrolls; clearly a desperate ploy to evoke comparison to the iconic Dr. Zaius.


In a CR@B Shell: Proffering a handful of neat touches which help both expand and knit together the centuries-spanning saga, alas Battle for the Planet of the Apes is far from the epic final bow such an iconic blockbuster series deserved. An admirable effort is ultimately let down by a lack of funds and an amateurish feel.
aaaaa
Created by ~ CR@B Howard ~ at 13:33