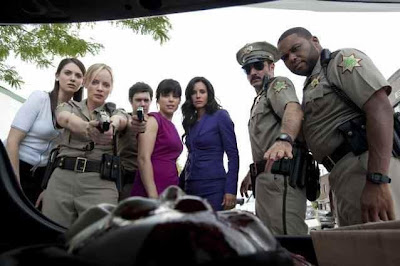 Jigsaw has his macabre creativity for death traps, Leatherface has his chainsaw and Freddy Kreuger has supernatural access into his victims’ subconscious. In comparison, Ghostface’s prank n’ stab routine doesn’t sound *quite* so inventive, but Kevin Williamson’s mask-wearing creation has another ace up its baggy serial-killing sleeve: a dynamite knowledge of horror film conventions and a depraved penchant for subverting the “rules” as it slices its way through murder hotspot Woodsboro. (Note I'm saying “it” to avoid any spoilers, not because I'm ill-mannered!)

So promises the tagline for series reviver Scre4m (that's Scream 4 to the easily confused), but I wouldn’t go quite that far – it’s more a case of the same rules warped out of predictability for a new generation of more clued-up, iPhone savvy victims (at one point Ghostface must reiterate over the phone: “I'm not an app”). Nevertheless, there’s still much fun to be had in determining just who has donned the ghoulish mask eleven years after trouble magnets Sidney Prescott (Campbell), Sherriff Dewey (Arquette) and Gale Weathers (Cox) last survived a grisly slashing.

“One generation's tragedy is the next one's joke.”

It was good to see the trio of series regulars return (even if none of them have exactly been hot property since Scream 3), meanwhile we are also introduced to a hip new cast of up-and-coming-faces (Roberts, Panettiere, Culkin) who have grown up with their only knowledge of the horrific local events coming in the form of in-universe horror franchise “Stab” (now on instalment number seven – some sagas just don’t know when to stop!), based upon journalist Gale’s bestselling book. Now they have to apply their knowledge of the movies to stay alive for real. 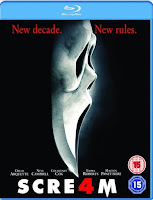 The in-jokes are slick, smart and hilarious (“Saw 5? I’m so over it - the same thing happens every time!”), with supporting roles and cameos granted to a number of “look who it is!” contemporary stars (Brody, Anderson, Brie, Anna Paquin, Kristen Bell). It’s just a pity that – after his previous effort, the inexcusably dire My Soul to Take, bombed – returning director Wes Craven’s otherwise solid latest entry is ultimately let down by a weak ending with quite possibly the poorest reason for somebody to slaughter their family and friends I have ever heard.


In a CR@B Shell: Something of a return to form for the post-modern slasher series after 2000's less-than-loved trilogy closer, but I'm not quite sure how much more mileage there is in this self-aware, reference-heavy concept – yet there's talk of Scre4m kick-starting a whole new trilogy. Some sagas just don't know when to stop!
aaaaa
Created by ~ CR@B Howard ~ at 01:55