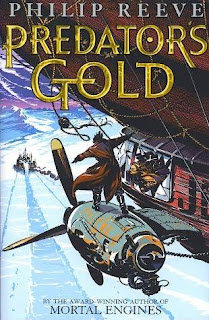 [SPOILERS] He may currently be shaggy beard-deep in Tintin and Hobbit shiz, but on the horizon Peter Jackson has an adaptation of the first book in Philip Reeve's bestselling Mortal Engines Quartet – that's the Hungry Cities Chronicles, as it is known in the US of A – in his bespectacled sight. This is the primary reason I sought out the introductory volume (Mortal Engines) last month; to get clued-up super early so I can pretend to know what the 'eck I'm talkin' bout when (or indeed if) the movie ever gets made.

Set on a post-apocalyptic Earth where entire settlements have uprooted from the nuclear-ravaged land they once occupied and gained themselves a set of wheels in an attempt to out-run one another for fear that the larger city-sized colonies will devour the smaller towns and villages and strip them of their much sought-after materials, commodities – even inhabitants!

“A City-eat-city world?!” I can imagine newcomers questioning. “You're taking the piss, surely?”. It's certainly a high concept pill to swallow, and I will admit to being *slightly* dubious as I read Mortal Engine's opening page – but, trust me, it isn't as ludicrous as the synopsis makes it sound, and I enjoyed this first dip into the bustling, ever-expanding steampunk-esque future-verse.

That being said, I can't claim to being unequivocally bowled over by it. I liked it, yes, but I didn't consider it sublime, faultless or unputdownable literary perfection and I was stumped when it came to conjuring up enough words to write a decent sized CR@Blog review (hence why you've never seen one). Nevertheless I was still satisfied – and curious – enough to seek out part two in the series: Predator's Gold. I'm pleased to report I've got plenty of opinions to wheel your way this time around ('cos if I hadn't there'd be nothing here for you to read, duh!).

Commencing two years after the first entry ended in spectacularly world-altering fashion, Predator's Gold sees our everyboy protagonist, ex-apprentice historian Tom Natsworthy, and his facially-disfigured girlfriend, Hester Shaw, pick up a famous literary hitch-hiker in their “inherited” airship, the Jenny Haniver. Seeking refuge on the once-thriving “Traction City” of Anchorage, the trio are in equal parts excited and disquieted by the level of disrepute that has befallen this once proud mecca, left devastated after a plague wiped out most of their population and left the inexperienced teenage margravine Freya Rasmussen in charge.

Seeing the arrival of bestselling histo-adventure writer Professor Pennyroyal as a sign that Anchorage must make its way to the long-believed radioactive wasteland that was once America, Freya asks the author, Tom and Hester to be her guests on the fanciful journey to discover surviving pockets of civilisation and enduring fauna. But all too soon relationships prosper and sour as secrets are kept and lies are told, and Anchorage is unaware that the predator city of Arkangel has been enlightened to their course and is closing in, hungry for resources – and that isn't even their biggest threat...

If Mortal Engines fell marginally fowl of origin story drudgery, Predator's Gold was free to soar into bold new territory, and this is a mighty inventive and colourful world. With an expansive range of characters who encompass every class from orhpaned royals to, erm, orphaned pickpockets, Reeve revels in a cast of full-bodied, three-dimensional players. Tom may be brave beyond his years, but he is by no means the angelic innocent hero figure you may expect from a young adult novel. He questions those around him and is unreserved in his judgements – even stooping so low as to wish his unfortunately-disfigured girlfriend wasn't so ugly, while encouraging unfaithful thoughts towards plump, pretty Freya.

Hester, meanwhile, is a bitter and understandably unconfident soul who makes horrendous snap decisions which I couldn't help but scream in disbelief at – she's hardly a prototypical fairytale princess, rather a real person, and it's refreshing to see a role model sulk and make mistakes. Devious shadow burglar Caul, too, is a complicated and well-rounded individual – a thief with a heart! Conversely, Pennyroyal was, unfortunately, a far too predictable red herring of a yellow belly, reminding me from the very outset as a Gilderoy Lockhart-type fraud (he of Harry Potter and the Chamber of Secrets).

Published by Scholastic but clearly aimed at a more mature teen audience than their usual school-age output, I was pleasantly surprised to see Predator's Gold push the boundaries – scarcely 17 years of age, Tom and Hester don't hide the fact that they are lovers who share a bed and enjoy drinking wine, while Reeve also gets a kick out of painting many a disturbing and unexpectedly violent picture. It's never unnecessary or offensively heinous, but it certainly packs a winding narrative punch.


In a CR@B Shell: A rolling stone may gather no moss, but a rolling city definitely gathers gloss. A step-up from an inspired but satisfactory origin story, steampunk action sequel Predator's Gold is an exhilarating, unpredictable and emotionally diverse adventure which left me eager to pick up part three.
aaaaa