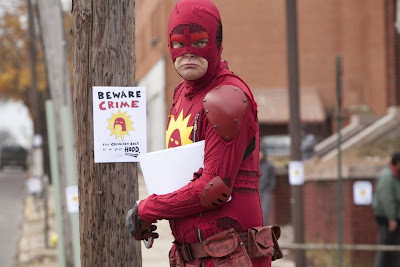 The second film I’ve watched in a fortnight which takes its bow on home video despite the kind of considerable star clout you would normally expect to carry a film to multiplexes with ease. But while The Resident (reviewed HERE) was a genre flick from an iconic studio which was overshadowed by a bigger hitter, James Gunn’s Super is a positively tiny indie production so audacious and unpredictable it borders on schizophrenic, which also suffers from being released in the trail of a major blazer with a spookily analogous concept.*

Super is another ordinary-sap-decides-to-fight-crime-in-a-homemade-outfit comedy – although when I say comedy I do mean it in the blackest sense imaginable; seriously, the ‘18’ rating is well and truly earned here with a torrent of uber-violent, uber-profane and uber-uncomfortable scenes which are just as likely to make your jaw drop as chuckle in amusement. Rainn “Dwight Schrute” Wilson is perfectly pitiable as Frank D’Arbo, a bitter and enraged sad sack who takes the law into his own hands after his junkie wife Sarah (Tyler) runs off with conceited dealer Jacques (Bacon).

Inspired by a religious TV mascot (Nathan Fillion cameoing as “The Holy Avenger”) and touched by the “Finger of God” (voiced by Rob Zombie) in a surreal dream sequence involving a lobotomy and alien tentacles borrowed straight out of Gunn’s 2006 tongue-in-cheek sci-fi Slither, Frank believes it is his destiny to become “The Crimson Bolt”, a superhero with absolutely no super powers whatsoever, but a startling proclivity for smashing small time criminals around the head - with a monkey wrench. The scene in which he crushes the skulls of two queue jumpers at a movie theatre is both hysterical and disturbing in its graphic excessiveness.

The brilliant Ellen Page (Smart People, Whip It!, Inception) is as infectiously exuberant as ever as comic-store-clerk-cum- kid-sidekick “Boltie” (real name Libby). Her enthusiasm to join Frank's questionably delusional cause veers from excitable to dangerously unsettling yet it's hard to see her as anything but adorable (well, except in one scene...) and she frequently steals the show (“What the fuck's a 'Robin' anyway?!”).

As this frankly atrocious crime fighting duo ransack the town in their quest to keep the streets clean of scum (“Don't steal! Don't deal drugs! Don't molest kids! You don't butt!”) the comedy ranges from the raucous to the awkward – this is, after all, a real world diegesis where they look like twats and can't fight for shit – but as the film heads for its climax and Frank sets out to win back Sarah from Jacques' drug-peddling clutches the death toll rises exponentially as, somewhat contradictorily, the film reveals its very human heart. 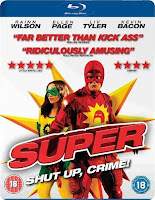 Crucially, no matter how diabolically brutal the ass kicking or excessive the gore (and, trust me, it is), you're still willing Frank to win; to overturn injustice and make something of his depressing and uninteresting little life. Super certainly isn't for everyone: you'll either love the savagery or be appalled by it, but after watching this last night and initially grading it with an ambivalent “3 ticks” my appreciation grew throughout today and I'm now looking back on its kooky, outlandish qualities with inflated affection. "The Crimson Bolt" and "Boltie" will definitely be getting a second spin in this CR@B's crib.