The Turning of the Hide 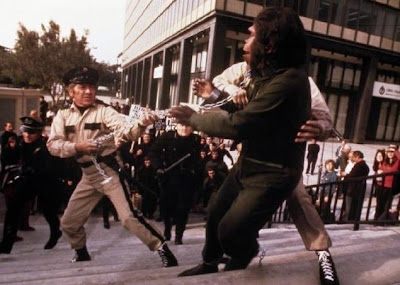 All long running sagas fear going stale – yet a lot of them fail to dodge the inevitable slide into repetition: the Saw films became little more than an excuse to showcase ever-more elaborate and unpleasant death traps, while the Final Destination series refused to progress from the “Death claims back what's rightfully his” formula. It’s a fear of breaking a tried and tested method, I guess – but there are only so many times movie-goers will pay to watch the same film with a different numeric denomination shoved after the title.

I don’t want to sound like a broken record – Conquest is, after all, my fourth review in the Planet of the Apes series – but my admiration for the franchise’s ability to stay fresh and present ever-evolving stories this far down the line expands with every instalment. Sure, Beneath began as just another “astronaut lost amongst apes” tale, but nobody could have predicted the frankly insane curveball it threw as to what Brent and Taylor found living beneath the Forbidden Zone. Conquest continues this commendable reinvention but without swinging too far from the tree.

Set in 1991, some twenty years after the brutal slaying of Earth-bound intelligent chimpanzees Zira and Cornelius at the end of Escape, and a deadly plague has wiped out our planet’s cats and dogs. Desperate for some form of lower life form to govern - sorry: "love" - human’s started to take apes as pets – but primate’s ability to learn basic tasks and mimic human movement led man to take advantage, and very soon pets became slaves.

Circus owner Armando (Montalban; seen briefly in a crucial scene at Escape’s close and reprising the character in a larger role here) does not concur with the enslaving of apes, but then he is hiding a controversial secret: his own ape, Caesar (McDowall), is not as dumb as he looks. Caesar is, in fact, Milo, the son of Zira and Cornelius whom the authorities were led to believe perished alongside his parents at the oil rig showdown in 1973. But in actuality he has been brought up in the circus and must hide his identity and bite his tongue when out in public or face death at the hands of the fascist enforcers.

The “future” 1991 of Conquest is a very distinct but wholly disparate civilization to the 20th Century Earth we saw in the previous episode; PA systems give out solemn public service announcements to an obedient uniformed society, "Ape Management" compounds torture the rounded-up monkeys into submission before engraining menial tasks into them, and police units patrol with truncheons at the ready in case an ape should put a paw out of line: it’s suffocating and unsettling, like something out of 1984 or THX 1138!

But when Armando is violently interrogated about Caesar’s true identity, the humanoid ape must go undercover amongst his own kind. Put through sadistic reconditioning, Caesar ends up being sold at auction and working for Governor Breck (Murray), whose chief aide, MacDonald (Rhodes), is sympathetic to simians. Learning of Armando’s death, Caesar is unable to contain his rage and he proceeds to round up his primitive brethren, teaching them combat and weapon techniques in secret. Revolution is in the air; one which will forever alter the course of human – and ape – history…

I have absolutely no hesitation in listing Conquest as by far my favourite of the Apes sequels; a strong concept is supported by an atmospheric environ and an epic final showdown. Watching the ape army silently advance through the concrete jungle towards the riot police was truly creepy, while the insurrection itself was a savage and bloody affair – and this was just the theatrical cut on DVD, as opposed to the more intense extended edition on Blu ray!

Caesar’s voiceless rallying of the troops with a stare and a nod did bring back painful memories of the telepathy employed by the mutants in Beneath, but of course he couldn’t speak to chimps who couldn’t (yet) understand him. Furthermore, I found Armando’s exposition-crammed dialogue in explaining the events which led up to this film to be horrendously clunky and unsubtle, but any minor qualms were more than dispersed by Caesar’s victory speech to his soldiers at Conquest’s sizzling conclusion:

“But now we will put away our hatred. Now we will put down our weapons. We have passed through the night of the fires, and those who were our masters are now our servants. And we, who are not human, can afford to be humane. Destiny is the will of God, and if it is Man’s destiny to be dominated, it is God’s will that he be dominated with compassion, and understanding. So, cast out your
vengeance. Tonight, we have seen the birth of the Planet of the Apes!”


In a CR@B Shell: A truly remarkable achievement for a third sequel, Conquest of the Planet of the Apes is a radical and (literally) revolutionary delight. Dark, cynical and pulling no punches – I’m tempted to shell out for the 40th Anniversary Franchise Blu-ray set just to see the alternative cut!
aaaaa
Created by ~ CR@B Howard ~ at 14:09