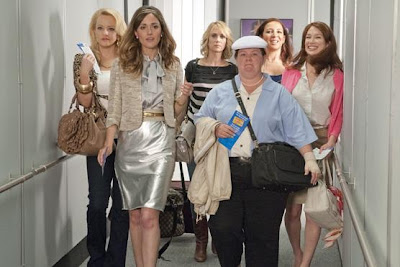 Surpassing the hardly meagre takings of other Judd Apatow-produced big hitters such as Superbad and Knocked Up, the Kristen Wiig co-written Bridesmaids has proven beyond any questionable doubt that sisters can do it for themselves. By “it” of course I mean: get pissed, act like crude kids and royally fuck up to comedic success – but hey, if it’s good enough for the Wolfpack…

Wiig (Whip It!, Paul) grants herself top billing, starring as 30-something Annie, a woman who always thinks she’s hitting rock bottom, until the next disaster befalls her shambles of a life. Dumped, penniless and renting a room from a pair of clueless chubby siblings (Wilson and Lucas) after her bakery business went bust in the recession, Annie futility pines for more from her arrogant fuck buddy (Mad Men’s Hamm) while driving a shit-heap of a car and making ends meet as a lowly cashier at a high street jewellers.

Annie’s life-long BFF, Lillian (Wiig’s MacGruber co-star Rudolf), meanwhile, seems to be moving onwards and upwards with her life, having recently gotten engaged and befriending her fiancé’s boss’s glamorous, loaded and oh-so-perfect wife, Helen (Byrne). Lillian naturally asks Annie to be her maid of honour, but this doesn’t stop jealousy immediately flaring up as bridesmaid’s old and new compete for Lillian’s allegiance in the lead up to her big day. 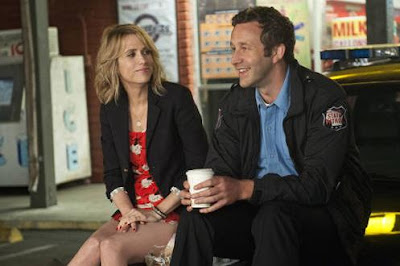 Supported by an ensemble of colourful misfit cohorts (McLendon-Covey, Kemper and McCarthy), Annie and Helen attempt to give Lillian her dream send-off, but their competitive natures often lead to cringingly awkward but laugh-out-loud hilarious calamities which begin to threaten Annie’s friendship with Lillian – and her involvement in the fast-approaching nuptials.

Wiig is fantastically credible in the central role; Annie’s depressing situation evoking sympathy from the audience without her frustrations becoming so despairingly insurmountable that you pity her plight. The authenticity of the social drama is sometimes at odds with the gross-out humour (shitting in the street being the ultimate low) – to such an extent that you feel the film would still be watchable even without the juvenile laughs – but an interesting (if potent) cocktail it sure does make.

McCarthy is also impressive as the vulgar, no-nonsense porker of the pack, Megan, who plays the oddball role with confidence and gusto without becoming the offensive loser that Zach Galifianakis became in The Hangover Part II (reviewed HERE). But for me the stand-out performance goes to The IT Crowd’s leading Irishman Chris O’Dowd who plays amiable traffic cop Nathan Rhodes. Down-to-earth, charming and fun; he’s the kind of guy Annie should be dating, proving that if women can act like drunken louts, then men can be caring and kind-hearted. See, we aren’t all self-obsessed jerks.


In a CR@B Shell: A combustible cocktail of humorous and heartfelt, Bridesmaids is an engaging comedy-drama which bestows its 30-plus femmes with kaleidoscopic shades to their personalities beyond the customary disapproving spouse stereotype. At just over two hours, however, it does feel like it could do with a trim to up the pace and sustain enthusiasm.
aaaaa
Created by ~ CR@B Howard ~ at 15:37