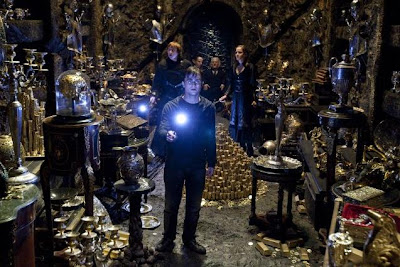 [SPOILERS AHEAD] So here we are. 2011. The end of the end. No, not the apocalypse, but the final part of the final film in the indescribably popular seven novel/eight film Harry Potter juggernaut. This is it, muggles – the end of many people's childhood (well, until interactive website Pottermore goes live in October at least), the ultimate showdown: bespectacled outsider Harry Potter (Radcliffe) versus the serpentine dark lord Voldemort (Fiennes). The Boy Who Lived, come to die...

I'm almost embarrassed to admit it now, but a decade ago, prior to the globally anticipated release of Chris Columbus' nauseatingly saccharine Harry Potter and the Philosopher's Stone adaptation, I really didn't imagine us getting to this late stage with still this much – if not more – fevered fanfare for the seventh sequel in the boy wizard series.

Don't misunderstand me, it wasn't because I didn't like J. K. Rowling's novels (I certainly did – and still do) or because I had little faith in the big screen conversions, but simply because I couldn't imagine the public sticking with a saga for that many closely-released instalments without losing interest or the quality dwindling as the young actors were replaced every two or three films and the magic was lost (this was definitely suggested at an early stage in the production – seriously glad they never followed that idea through). I guess I was, in my 17 year old mind, aligning the Harry Potter franchise alongside bargain bucket pap like the latter Police Academy drivel. Boy was I naïve... 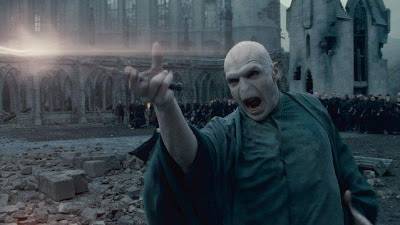 But I've grown a lot, learned a lot and watched a lot since 2001, and I can now fully comprehend why these mesmerizing magical marvels have so enraptured a generation of children and adults alike. As the loose-end-tying encore, it was nigh-on guaranteed that Deathly Hallows Part Two would go out with an almighty bang – and in that sense this epic conclusion certainly does not disappoint: from a break-neck break-in to Bellatrix Lestrange's (Bonham Carter) private vault at Gringotts to a rallying of the troops prior to the last stand against He Who Shall Not Be Named's army of rabid Death Eaters, this fourth David Yates-directed instalment is almost non-stop action!

Picking up the frantic pace immediately from where 2010's Part One (reviewed HERE) pressed pause, and despite covering just a third of the final novel's plot, Part Two's opening Bank raid still feels curiously rushed – and far too easy for a trio of students to achieve given the elevated level of supernatural security that is supposedly meant to safeguard the community's fortunes against such invasions; even if Harry, Ron (Grint) and Hermoine's (Watson) ongoing hunt for the remaining Horcruxes which possess Voldemort's dissected soul is a worthy cause.

After spending a film out of their comfort zone wandering the real world, the return to the iconic safehouse that is Hogwarts School of Witchcraft and Wizardry is a welcome one: even if the makeshift battleground does take one hell of a hammering as Voldemort and his cronies unleash all manner of dark magic on the former stronghold. But even if the towers tumble, our heroes come out of the fracas stronger than ever, with long-overdue character-defining moments for Professor McGonagall (Smith), Neville Longbottom (Lewis) and Mrs Weasley (Walters) inducing huge grins amidst the descending chaos. 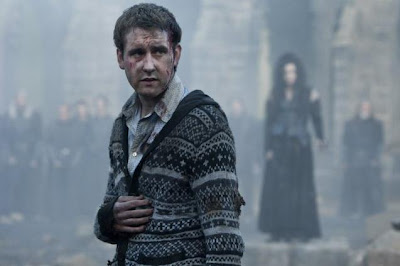 And before you ask: yes, this final film is by far the darkest of them all – as if you hadn't guessed the trend years ago! Death, destruction and disfigurement, giant spiders, ghostly apparitions and freaky Voldemort-shaped fetus-thingies (brace yourselves, kids!) are all in ripe supply in this sumptuous-yet-brutal clash of good versus evil.

Warwick Davis in a dual role as both Griphook the Goblin and Professor Flitwick is granted more screentime than ever, while Ron and Hermoine's sophomore visit to the Chamber of Secrets, the return of the Giants and acromantulas and flashback footage from previous films all help provide this epic send off with a unified retrospective veneer: it's great to see this dense and detailed universe come together one final time – and for a very vital occasion!

But despite the grandiose of the fancy fireworks, I was actually more impressed by the film's rare quieter moments: two stand out scenes for me were shady Snape's (Rickman) belated redemption via a very revealing saga-spanning final dive into the memory reviewing Pensieve and Harry's emotional pre-face off pep talk from his dearly departed guardian angels. Alexandre Desplat's resonant and haunting orchestration provides a potent soundtrack to these more personable and reflective breathing spaces.

A lack of coherence in deducing how many Horcruxes remain to be destroyed (is Voldemort's pet snake Nagini or Harry himself the final one - or is it somehow both?), a lack of suspense as a wand-blasted Harry leaps out of Hagrid's (Coltrane – underused) arms and back from the “dead”, and a slightly anticlimactic future-set epilogue (yes, it's Harry's journey come full circle, but it's hardly spectacular stuff) are but minor gripes in an otherwise storming send off to J. K. Rowling's spectucular empire. Shame it had to end, really...


In a CR@B Shell: It's not perfect, but Deathly Hallows Part Two is a valiant, glossy and passionate conclusion to a truly remarkable ten year cinematic broom-ride. Our lightening-scarred guide to the joys and horrors of the wizarding world has come a long way since he emerged from that cupboard under the stairs – and you can't deny you haven't enjoyed watching him; even if his first two adventures do seem mighty twee when compared to the darkness that followed...
aaaaa
Created by ~ CR@B Howard ~ at 14:25