Laugh it up, Goofball 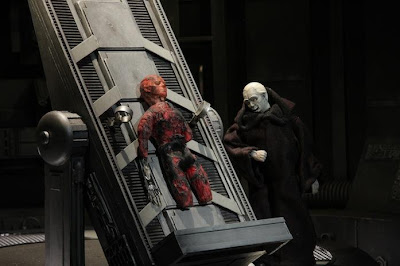 It's a bunch of over-grown kids goofing around with action figures, so you know not to expect high-brow philosophical or existentialist musings from this third roast of all things Star Wars. Even so, Adult Swim's Robot Chicken: Star Wars Episode III still fails to live up to the duo of uproarious-yet-affectionate Emmy-award-winning piss-takes which came before it. A shame it is, as Yoda would say, looking forward to this I was; but to be expected, perhaps, hmmm?

Maybe it is a case of diminished returns? After all, no matter how great a fan of George Lucas' iconic space saga I happen to be, even I have to question how many times can someone spoof the same six films and still be fresh? Family Guy (creator of which, Seth MacFarlane, is instantly recognisable on vocal duties here as Emperor Palpatine) has all-too-recently lapooned the same target for the same demographic with their adult-aimed trilogy, and they are by no means the first in the 35 years since A New Hope began one of – if not the – most successful and beloved motion picture series of all time (Spaceballs, anyone?).

RC co-creator Seth “Oz from Buffy” Green openly admits in a talking head on just one of this disc's impressively plentiful special features that the writing team had already “thrown everything they had at the screen” for 2007's Robot Chicken: Star Wars Episode I, and while the Bounty Hunter-centric sequel was an equally humorous extension to the sandbox juvenility, perhaps Episode III was one follow-up too far (particularly as it is a bumper hour long edition – a far cry from the usual RC length of 11minutes, and the previous SW specials at 21)? 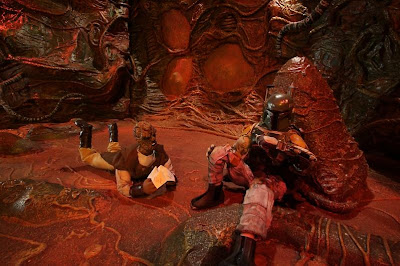 Too many of the sketches feel overlong; favourite characters (such as MacFarlane's wacky “Palpy” and Donald “Turk from Scrubs” Faison's everyman Gary the Stormtrooper) are recycled to death while other more obvious targets (Jar Jar, C3PO, little Ani, the Ewoks) are sidelined to little more than cameos. Yes, admittedly, it would be far too easy to bully the weak, but when Ahmed Best and Anthony Daniels gamely return to voice their career-shaping roles and the boy-who-will-be-Vader is brought to life by none other than Zac Efron, then you can't help but feel like they are somewhat wasted with no more than a couple of lines apiece.

Fun is still to be had: fanboys will find a bounty of intricate detail to delight in (for all their shots at the saga, the RC-ers are massive fans paying a skewered tribute to the films that inspire them), while giraffe-necked Jedi Yarael Poof (Zeb Wells) and elephantine musician Max Rebo (Hugh Davidson) are characterised hysterically as a Woody Allen-alike cynic and resolute jazz cliché respectively. Futhermore, the voice cast is mightily impressive: beyond the names prior stated, Breckin Road Trip Meyer plays Boba Fett as an arrogant wise-ass, Lando Calrissian himself (Billy Dee Williams) is back with his tongue firmly in cheek and Tom Kane (of The Clone Wars fame) reprises his dual role of Yoda/Narrator.

Back to the host of extra features (the entire runtime exceeds 230minutes!), and an informal meeting with the main man at Skywalker Ranch highlights the auteur's acute awareness and sense of humour, while half an hour of deleted scenes and animatics reveal that some of the jokes left out (Porkins! Boss Nass!) are stronger than what was retained. But informal is definitely the name of the game here, as the amateurish feel stretches beyond the show itself and reveals the team to literally be a bunch of young guys with a love for toys and science fiction playing around in a big warehouse. Surprisingly, this lo-fi release was DVD only(!).


In a CR@B Shell: Don't let the crude stop-motion animation fool you – a whole heap of time, effort, love, thought and passion has gone in to crafting Robot Chicken: Star Wars Episode III; it's just a shame that the parodies are beginning to wear a little thin after three increasingly longer specials. The farce is still with this one, it's just not as strong as it once was.
aaaaa
Created by ~ CR@B Howard ~ at 16:56