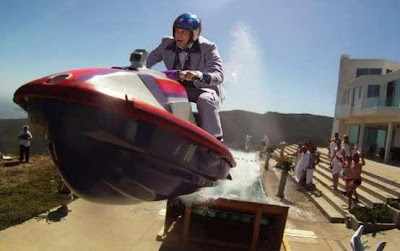 Over a decade on from their controversial but much-loved MTV debut (and, if I’m completely candid, about 5 years since I thought anyone still gave a hoot), this is the third big screen outing for brave/stupid thrill-seeking pranksters Johnnie Knoxville, Bam Margera, Steve-O et al – many of whom are now nearing the big 4-0 (that’s physical age, not mental). How much longer can they keep doing this to themselves?!

What more can really be said about Jackass? As much as the rear of this DVD can label this “their wildest round of mischief and mayhem yet”, it’s really just more of the same (and even more still with the director’s cut): more juvenile japes, more irresponsibly life-threatening feats of peril, more explicitly tasteless buffoonery and more frankly disgusting tests of endurance. Oh, accept this feature was shown in 3D at the cinema – a gimmick I can’t imagine added anything to the lo-fi shenanigans. 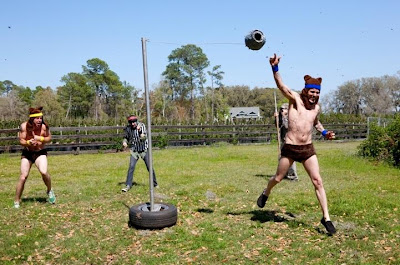 It’s hard to pick out a “favourite” skit (they’re all recklessly daft), but the most foul and indecent have a strange car crash curiosity about them: even the threat of throwing up can’t tear you away from watching Steve-O propelled into the air in a porta-potty loaded with dog shit, or drink a beaker of sweat collected from the less-than-trim Preston Lacy’s cellophane exercise wrap. *Heave*

Do I think they’re all insane? Yes, without doubt. Would I attempt any of the crackpot lunacy at home? Not if you paid me. But, most importantly, is it entertaining? Well… yes, you got me! I concede I did often snort with amusement despite myself – but by now you know what you’re letting yourself in for and you know if you’ll be entertained or repulsed by this unrelenting montage of madness.

It’s a peculiar experience to watch something so inexorably frolicsome in the wake of Ryan Dunn’s tragic death – but it’s also remarkable that it wasn’t the show that killed him. The amount of bodily abuse these men accept in the name of Jackass is torturous to the point of masochistic – although I did note that Wee Man’s participation was kept to a bear minimum. Maybe he’s finally growing up? Oh, no, wait: that's him being super glued in the “69” position to Lacey's bare stomach... Forget I said anything.


In a CR@B Shell: Very much a marmite movie which you’ll either worship or despise, hence why I’ve remained impartial and gone straight down the middle in my rating of Jackass 3D. Watch if you’ve got the stomach for it, if not stay well away. You have been warned.
aaaaa
Created by ~ CR@B Howard ~ at 13:12