From Swamp Thing to Swamp King? 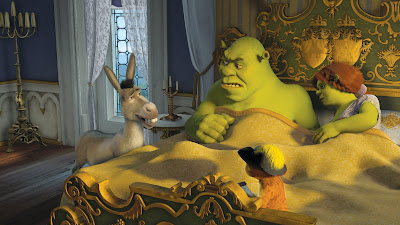 I was in the minority who genuinely favoured 2004’s Shrek 2 to DreamWorks’s original fantasy-flavoured romp, yet I was in absolutely no rush to see this largely reviled threequel, for the very reason that it was largely reviled. In fact, franchise closer Shrek Forever After is already out on DVD before I belatedly caught up with this 2007 entry (recorded from BBC1 on Christmas Day). At this rate, expect the fourth film’s review circa Christmas 2013!!

Series director Andrew Adamson had already departed for Narnia prior to this entry, but otherwise all of your favourite fairy tale folk from Far, Far Away are present again. Unsurprisingly, most of them are totally superfluous and only on hand to provide brand familiarity, bolster toy sales and volunteer the occasional witticism. Nevertheless, they are joined by a veritable deluge of new-but-familiar mythological friends (Arthur “Artie” Pendragon, Merlin, Snow White, Rapunzel). 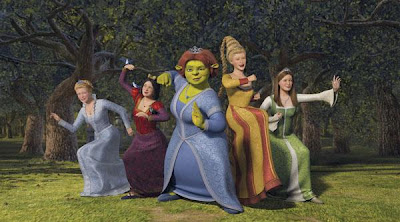 While this cross country undertaking to (and then from) Worcestershire Academy provides the narrative’s driving force, there is rebellion afoot back home in Far Far Away, with vainglorious but down-on-his-luck Prince Charming (Rupert Everett) gathering together a host of e-e-evil pantomime villains (Ugly Stepsisters, Captain Hook, Cyclops) to seize the dead king’s crown in Shrek’s absence.

While not the complete disaster I was predicting, Shrek the Third does lack the “ogre the top” (ahem) sheen which breathed life into its predecessors – at times it feels more like a lesser, direct to DVD cash-in than a blockbuster of equal worth. The story felt flat and lacking inspiration, while the demographic-straddling humour felt less fresh and

That being said, there are a few joyfully humorous gags (I am loathe to admit that I laughed out loud at Gingerbread Man shreking himself), and your heart must be made of dragon hide to not find the bumbling and banter-packed misadventures of the three spirited sidekicks charming, even if this isn’t their greatest adventure.


In a CR@B Shell: Nestled somewhere between Shrek the Turd and Shrek-tacular; the oddball characters we have come to know and love just about keep this saga-stretching second sequel afloat, even if it does feel like a lazier effort than its boundary-pushing predecessors.
aaaaa
Created by ~ CR@B Howard ~ at 09:53