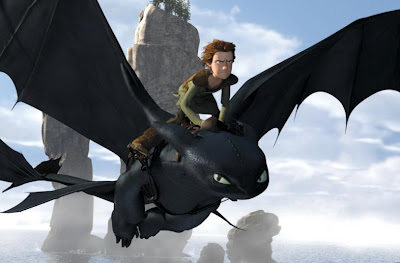 Despite being initially discouraged by this fantasy adaptation’s overly stylised Lilo and Stitch-meets-Pokémon-esque animation style, a torrent of glowing reviews upon its theatrical roll-out in March roused my interest. Indeed, once you get past the cartoony Vikings and cutesy winged creatures, How to Train Your Dragon is a bright and witty coming-of-age tail which also packs a hefty dramatic punch.

The graphics are first rate, with the aerial shots of protagonist Hiccup (Baruchel) riding his overgrown “pet” Toothless rendered particularly beautifully. The attention to detail - wood grain, barnacles on the longboat’s underbelly, misty mountain ranges and the like - is stunning, even if the character designs are larger than life. But it is the characterisation of these wide-eyed, overgrown Norse warriors and their fire breathing foes which provides this film its flair.

Much to his chieftain father’s (Butler) chagrin, young Hiccup isn’t like all the other brutish dragon slayers in the village of Berk: he’s a designer – and a pacifist. So while his contemporaries – the delightfully named Fishlegs (Mintz-Plasse), Snoutlout (Hill) and twins Ruffnut (Miller) and Tuffnut (Wiig) – and the girl of his dreams, Astrid (Ferrera), are desperate to start combat training to bring down the winged scourge of their village, Hiccup is secretly befriending a “deadly” Night Fury in the forest.

The Sorcerer’s Apprentice star Baruchel has a very distinctive vocal talent which suits weedy-but-endearing Hiccup well, while Butler lends fearless leader Stoick the requisite gravitas; father and son couldn’t be more different, and Stoick’s blatant disappointment in his quirky offspring provides much of the film’s poignancy, as Hiccup’s reverence for Toothless proves far more valuable than the Viking’s traditional “kill first, ask questions never” technique – but will they ever listen to the tribe pariah?

Were I to identify a couple of the film’s weaker elements, then Hiccup’s fellow trainees are effectively worthless, with any attempts at individual identities being more down to their recognisable voices than their minimal impact on the narrative, while love interest Astrid (a character not present in Cressilda Cowell’s source novel) is treated somewhat feebly, shifting from bantering and battling ladette to sweet love-stuck companion the minute Hiccup reveals his Night Fury (it's not as dodgy as it sounds…).

However, a game-changing revelation late in the second act sets up a dramatic and high-octane finale as Hiccup’s father recklessly sets out to undo the “shame” his wayward son has brought upon Berk, with an (un)expected hero swooping in to save the day. Naturally for a family film, many badly informed beliefs are turned around before the credits roll, but it is the verve with which How to Train Your Dragon delivers these life lessons that makes it stand out from the pixelated crop.


In a CR@B Shell: Humorous, adventurous and distinctive, How to Train Your Dragon flies high above the raft of analogous CGI ‘toons due to relatable central characters battling universal themes alongside terrifically flamboyant giant mythical reptiles.
aaaaa
Created by ~ CR@B Howard ~ at 09:36