'Tis the Season to be Busy

So here is a smattering of slimline assessments – all the goodness of a regular CR@Blog, with half the inane prattling (not scientifically proven).

Robert Polar Express Zemeckis’s visually consummate CGI retelling of Charles Dicken’s Victorian ghost story sees rubber-mouthed Jim Carrey taking on a multitude of assorted vocal roles, including the misery Ebenezer Scrooge, and the Ghosts of Christmas Past, Present and Yet to Come.

Some of the landscape rendering is so masterful you’ll wonder whether you’re not looking at a photograph, while Colin Firth’s festive Fred and Bob

Hoskin’s portly Mr. Fezziwig look so much like Colin Firth and Bob Hoskins that they may as well have done away with the pixels altogether.

Ultimately, other than some boastful ethereal effects – this was shown in 3D cinemas, after all – and a nightmarish shrink n’ chase scene with a demonic horse and cart, this umpteenth cinematic adaptation offers us nothing we haven’t seen copious times before, no doubt at a tenth of the budget of this overblown Disney retread. If that makes me a Scrooge then I say “bah, humbug!” 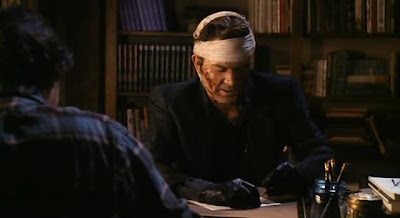 Creepshow collaborators and genre legends George A. Romero and Stephen King joined forces once again in the early ‘90s, with the Granddaddy of the Living Dead bringing the literary spinechiller’s pseudonym-exorcising 1989 novel to the big screen.

King waved goodbye to his own darker half “Richard Bachman” shortly before writing this terrifying tale of a pen-name-made-flesh, with Oscar winner Timothy Hutton (no, me neither) stepping into the dual role of Thad Beaumont/“George Stark”.

This is not a murder mystery, since the supernatural nature of Stark’s personification is never in doubt, so when Thad is accused of slaughtering those who were in on his pseudonym’s “death” we never once share the police’s suspicions.

Nevertheless, this is a polished and visceral horror (twin tumour!!) with a superbly ambitious and disturbingly twisted end for the evil Stark more than making up for any plot holes (like why prime suspect Thad was free to go about his day to day life during the investigation, besides the fact it would otherwise have been a very short film). 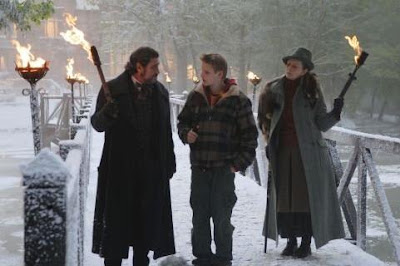 Everyone always tells you to read the book before you see the film; well here is an instance where I did just that and thoroughly regretted it. Character names aside, there aren’t many details from Susan Cooper’s 1974 fantasy adventure novel that the filmmakers didn’t alter.

The plot – involving teen “Old One” Will Stanton’s (Alexander Ludwig) search for six signs to stop the Dark from, you’ve guessed it, rising –

Viewed on its own accord, I’m sure this magical fantasy romp would more than satisfy young fans of the Harry Potter, Eragon, Narnia, Inkheart, Lemony Snickett and Golden Compass ilk, but when seen in light of the visionary novel, the only thing it leaves you seeking is an aspirin! The Dark is Rising purists beware.