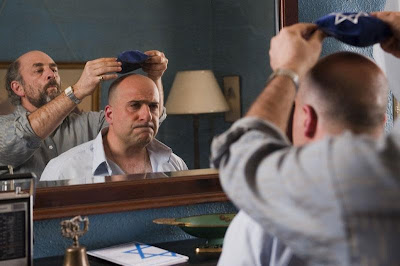 Taking a subject as sacrosanct as religion and revolving an identity crisis comedy around it was a brave move by David “I’m a Jew” Baddiel, particularly when dealing with two staunchly identifiable faiths, and I certainly respect the subtext of multicultural unity which underlies the comedian's first foray into feature films.

Respect aside, however, as much as I can’t fault the platonic chemistry between remarkably restrained Omid "moneysupermarket" Djalili – a relaxed Muslim who has a theological predicament when he discovers he was adopted and born a Jew – and his deadpan American Jew rival-come-confidant Richard The West Wing Schiff, The Infidel simply isn’t that

Miranda Hart and Matt Lucas also fail to bring the laughs in cameo roles, while the script – for all its honourable intentions – follows all the obvious routes you would expect (struggling to pronounce “Oy vey” being the most trite), with a “twist” involving Djalili’s favourite ‘80s pop star being far too apparent and far too coincidental to deliver the necessary karmic conclusion. 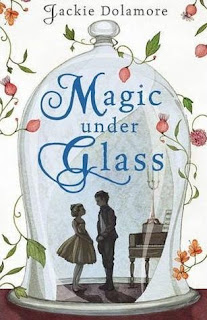 Okay, yes, it’s a novel aimed at teenagers (sorry, "young adults”), but the combination of fantasy, the paranormal and doomed love appealed to me, having been so engrossed in Joanna Clarke’s Jonathan Strange & Mr. Norrell and The Ladies of Grace Adieu. Indeed, Jaclyn Dolamore’s debut novel could very easily fit into the same universe, set as it is in an alternate Victorian age where magic is performed by sorcerers, and fairies and ghosts exist.

Exotic dancer Nimira is whisked away from her downtrodden city existence by magician and widower Hollin Parry, who puts her up in his labyrinthine mansion in exchange for her oral services: he wants her to accompany his newest acquisition – a piano playing wind-up automaton – and perform to a more respectable crowd than she is accustomed.

But all is not as it seems, as Parry is hiding some rather dark secrets about his past and his wife’s present, while there are murmurings from his staff that the musical automaton is haunted and intent on escape…

Dolamore’s writing style is instantly absorbing, her spritely prose filled with some truly beautiful descriptions which transported me into this whimsical world, without ever overcomplicating the scenario.

At a trim 225pages, Magic Under Glass is hardly a challenging read, and the chapters are accessibly swift, but as the truth behind the automaton is revealed and Nimira finds herself falling for Erris – the fairy prince locked inside the clockwork man – I couldn’t help but wish for a more dynamic plot.

Whether it is because Dolamore is catering for her younger audience, or simply not wishing to obscure her premiere vision with unnecessary narrative threads, I found the story to be far too linear and lacking in surprises, even when opposing forces – in the form of dispassionate sorcerer and fairy hater Mr. Smollings – reveal themselves and secrets are unearthed, it is always far too obvious what the next course of action will be. 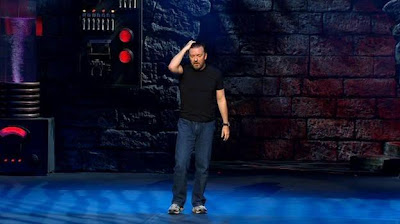 His over-opinionated and callous brand of comedy isn’t to everyone’s taste, but I’ve always found Ricky Gervais to be an intelligent and darkly sarcastic delight, even if his podcast banter with mate Karl Pilkington does occasionally verge on bullying.

The British comic’s previous stand-up shows have held up incredibly well to repeated viewing, continually inducing a fit of giggles from yours truly, however, after only one viewing I can already recognize that Live IV: Science isn’t up to his customary best.

As his success has skyrocketed, Ricky’s stage sets have become evermore elaborate (Frankenstein’s lair, here, looks amazing, despite largely being ignored and never utilized in the lazily unstructured and chiefly unscientific show), while his rotund physique has noticeably slimmed and his on-stage ego ballooned.

Consequently, the man who was David Brent still frequently mocks his “fatness” while using this self-deprecating honesty to openly lambast the overweight. It’s shtick which ran its course two tours ago and frankly no longer delivers the same effect.

No matter how many times Gervais candidly “apologises” for his brutal jibes (comedy, apparently, allows one to be sexist/racist/size-ist/sacrilegious, provided you laugh after delivering the insult), there’s no getting away from the fact that the persona on the Hammersmith stage is far crueller than on previous live DVDs. I realise the “I’m famous, you’re not” ego is part of the act, but it certainly isn’t as fresh as it once was.