Ghosts in the Twilight 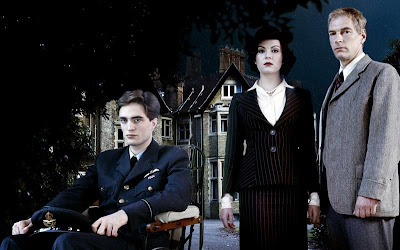 This loose literary reworking of Dennis Wheatley’s “The Haunting of Toby Jugg” stars Hollywood heart-throb Robert Pattinson in a post-Goblet, pre-Twilight role as the disabled and traumatised World War II RAF airman of the title, confined to a wheelchair and committed to a Welsh military hospital to recuperate both psychically and mentally from the injuries that have befallen him.

Whereas Wheatley's 1948 source novel had a strong element of the occult and genuine supernatural hocus-pocus, Chris Durlacher’s BBC Four adaptation keeps all the horrors inside Toby’s shell-shocked mind, as this psychologically damaged patient is plagued by nightmares of the innocent families he killed in bombing raids, while hallucination-conjured spiders scuttle en-mass over his duvet.

In the dreary daylight hours, meanwhile, Toby cannot escape the creeping suspicion that his doctor, Hal Burns (Julian Sands), doesn’t have his best interests at heart, while the aunt (yes, aunt) Toby loves and wishes to marry (Rachael Sterling) isn’t returning any of his handwritten correspondence. With all of this weighing on the disabled pilot’s mind, The Haunted Airman certainly provides the rising Brit-born star with a chance to stretch his limbs – dramatically speaking, at least. Not that Edward Cullen is ever a bundle of laughs...

But for all of the eerie atmosphere and low-shot camera angles, this modest dramatisation is simply far too sluggish to grip your attention, even at little over an hour long. Intercutting scenes within the dank hospital with scarlet-drenched flashbacks to deafeningly chaotic and dramatically shot war memories is clearly an attempt to stun and disillusion the viewer, but it merely comes across as a confusing hindrance, to little narrative purpose.

Style over substance? That certainly seems to be Durlacher's intention, but this tactic is only successful when a production's distinctiveness compliments the material, not when tumultuous cutaways are edited in to juxtapose the brooding and uneventful story at seemingly haphazard instances. Ultimately, the transient tale's conclusion fails to justify the build-up or deliver a satisfying enough twist to tie the events together, leaving you with a creeping suspicion that the cast and crew have somehow missed the point of Wheatley's vision entirely.


In a CR@B Shell: Arachnophobes will be paralysed with fear, but true horror hounds will be left dispirited. Wheatley fans, meanwhile, will cry blasphemy at the significant changes to the novel's essence. Mark this weary Beeb “thriller” up as strictly for R-Patz droolers only.
aaaaa
Created by ~ CR@B Howard ~ at 13:16