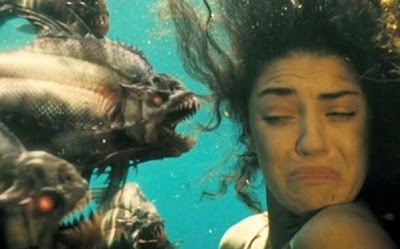 Spring break, the notorious US tradition where thousands of supposedly learned students descend upon sunny beach communities to wreak havoc for a week of unopposed study-free partying. This year, however, in Lake Victoria, the fun-loving local “sand rats” have some company. These mouthy little party-crashers are from a very different school indeed, although they are also hungry for flesh, and any co-ed taking a dip in the crystal blue lagoon will get nibbles thrown in free of charge.

A minor earthquake in the Arizona region has caused a cavernous rift to unleash a once-thought-extinct breed of deadly piranha into the water. "Thousands of them. And they're pissed," so diver Novak (Adam Scott) helpfully clarifies, having just hauled out the lifeless skeleton of one of their meals. Jaws ain't got nothing on these diminutive little blighters, who have survived in isolation for two thousand years by eating their own kind. Now, however, they have a craving for students, and spring break is about to get a whole lot wilder.

The impressive cast just have a blast as madness descends – appendages get bitten off in seconds, eyeballs (and other organs) float towards the screen and boat motors make remarkably good fish deterrents. It's great to see Christopher Lloyd back to his madcap best as the panicky piscine expert, while Kelly Brook is remarkably game for everything the director requires. But special note must go to Jerry Sliders O'Connell

As the lunacy progresses, the bikini-clad babes get naked-er, the death tole gets bigger-er, the wise-cracks get stoopid-er and the destruction gets gorier and evermore inventive... er. It's brash, trash and ludicrously lowbrow, but unapologetically so. Piranha 3D certainly won't be to everyone's taste, but it knows its audience and panders to them perfectly.


In a CR@B Shell: You'll giggle, you'll cheer, you'll gawp and you'll gag, but you'll never be bored, provided you aren't expecting logic or decorum, that is.
aaaaa
Created by ~ CR@B Howard ~ at 05:11