Step into the Light Fantastic 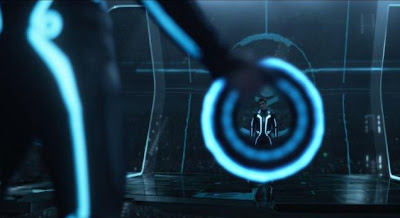 Having reacquired the position of CEO of ENCOM International in the 1980's and distributed copies of a best selling arcade game based upon his digital endeavours, Flynn has been missing and presumed dead for nearly two decades, leaving his business empire in the hands of a board of directors while the controlling shareholder and Flynn's heir – his now 27year old son, Sam (newcomer Garrett Hedlund) – wastes his life away dropping out of college, pulling financially costly pranks on the ENCOM directors and seeking ever-greater adrenaline rushes.

But Sam is about to have an adrenaline rush like no other; asked by his father's friend and ENCOM executive Alan Bradley (Bruce Babylon 5 Boxleitner, reprising his role from the original film) to investigate the source of a mystery pager message apparently sent from Flynn Snr.'s abandoned arcade, Sam locates his father's secret laboratory and is accidentally transported inside The Grid.

A dazzling cyberspace of abstract angles, funky construction, disco lighting, physical anomalies, neon highlights, Daft Punk helmets and leather loving computer programmes made flesh. It's utterly gorgeous to look at but mind boggling to conceive. This is a virtual world where your digital imprint is carried around by each user in the form of a literal “hard disc” which, bizarrely, doubles as a deadly throwing weapon in gladiator-style duels pitting players against one another (for some reason I'm sure...). Um, what if your opponent catches your disc and dumps it in the Recycle Bin?

Sam discovers that The Grid is run by CLU – a digital clone of his father who betrayed the real Flynn Snr. and deletes any imperfections to his “master race” – but before the outsider is defeated, Sam is rescued by Quorra (Olivia The O.C. Wilde) and reunited with his real and ageing father, who has literally been gridlocked since 1989; trapped inside his own creation, living in the Outlands in fear of his tyrannical youthful doppelgänger.

Hayden Christensen-alike Sam – who far too easily accepts everything that happens and far too quickly masters throwing discs and riding light-cycles – is determined to delete CLU and make it back to the real world with his father in tow, but safe passage is hard to come by when CLU's guards roam the grid and neutral programs can so easily double cross you. It's not quite as simple as pulling out the plug, you see.

The usually dependable Michael Sheen pops up in one of his more... eccentric roles, channelling his inner Ziggy Stardust with horrendously out-of-place character Castor, a camp cocktail-swigging bar owner (yes, inside a computer program...) who nods to DJ's Daft Punk – who also contributed a pitch-perfect synthy electronica score – to change the choonz while he “shoots” lasers from his neon cane as his bar is turned to rubble in a bloody battle raging around him. 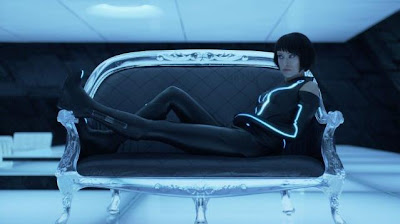 To reiterate my early point, TRON: Legacy is aesthetically flawless; it really is an awe-inspiring universe, even if the “de-ageing” CGI to recreate a 30 year old Jeff Bridges does reveal itself whenever CLU opens his mouth. This is boundary-pushing entertainment here. But much like that other recent spectacle-heavy 3D blockbuster (yes, Avatar, I'm looking at you), TRON: Legacy stutters somewhat in the story department.

Unlike James Cameron's twee environmentalist message, I'm not accusing debut director (wow, what a first gig!!) Joseph Kosinski's sci-fi sequel of being predictable, instead quite the opposite: a narrative introduction, two drawn out speeches, constant flashbacks and an impressionist news-story montage and still TRON: Legacy is utterly baffling. I appreciate that in science fiction you have to dispense with rationality and open up your imagination, but even as a hardened genre “geek”, I felt myself rolling my eyes at the convenient story fixes and strung out, laboured plot.

Why, for instance, if Jeff Bridges – the “God” of The Grid, lest we forget – is able to re-programme CLU's guards with a simple code typed onto their back-plates, and has the fantastical ability to generate enough “power” to pull CLU back towards him, has he been content to live in hiding amongst pixel folk for two decades?! If it was that easy, why wait? Now I know there probably is some in-universe reason for this. Hell, it may even have been

mentioned in amongst the jargonous diatribe of dialogue, but issues like that just yell “writer's cover-up” to me.

Maybe that's where the problem lies, maybe there was too much pressure upon the four writers to make this the most spectacular, mind-blowing ride of your life that they went too far and over-thought it, weighing themselves down with unnecessary story baggage when all anyone really wants to see is futuristic looking bikes skidding around The Matrix.


In a CR@B Shell: A dazzling showcase of awe-inspiring wonder and frenetically choreographed set-pieces – it's just a pity that the overly TRON:voluted plot and endless layers of exposition frequently distract your attention from the beauty and remind you that even the herd of story scribes really haven't a CLU what's going on.
aaaaa
Created by ~ CR@B Howard ~ at 12:25