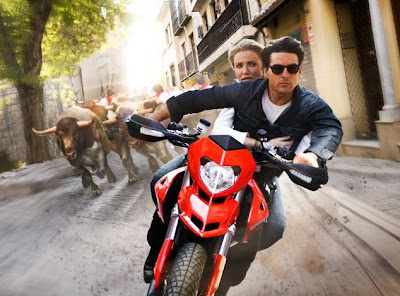 It's not hard to see why Knight and Day's content failed to make amends for the titular pun-ishment: for all of the fish-out-of-water “hilarity” of seeing excess baggage Cameron Diaz hauled unwillingly from exotic locale to exotic locale, this Six Days Seven Nights a-like game of cat-and-mouse drags on for far too long – but still they weigh down this

Diaz's everywoman mechanic June Havens flips from trusting to framing Cruise's fugitive spy Roy Miller so often that you quickly lose interest in their campaign to save an eternal energy source from being sold on the black market, and when even a motorcycle chase along the streets of Spain amongst a herd of stampeding bulls doesn't grab you by the horns, you know that this really is one mission incongruous.


In a CR@B Shell: Like an expensive vacation you just want to leave early, Knight and Day packs in so many of the richest ingredients that you switch off from the pretty landscapes and ballsy adventuring and just long to be back in the comfort of a better film.
aaaaa
Created by ~ CR@B Howard ~ at 03:54