Following my exasperation at what Hollywood had done when reimagining Susan Cooper's The Dark is Rising (reviewed HERE) for the 21st century movie-goer, I decided to “go in blind” when watching their celluloid translation of Cirque du Freak: The Vampire's Assistant, so I could judge the film for what it is, rather than what it could or should have been; an independent entity separate from its source material.

I have been reliably informed that I made the correct decision, for all manner of major and minor plot, character and chronological edits have left fans of the fantastical prose reeling with disappointment. Pour exemple: uprooting the setting from the UK to US means a cross-Atlantic vacation is obviously dropped, while the protagonist's love interest (Carlson) is reformatted into an adage-spouting circus monkey. Literally. But I, of course, will never know any of this... Not first hand, at any rate.

Based on the opening trio of novels – referred to as the Vampire Blood trilogy – from British author Darren Shan's twelve book teen vamp-chise, this flashy, spectacle-filled adaptation boasts an impressive line-up of big name stars, many of whom are willing to get “f-ed up” (that's freaked up, FYI) with all manner of grisly and peculiar ailments and, er, talents, for all of five minutes screen time.

Ladies and gentlemen, boys and girls: Roll up, roll up and witness for yourself a man with an impossibly small torso (“Alexander Ribs”) who looks like his gut has been eaten away; a bloater who appears to be literally eating for two (“Rhamus Twobellies”); a woman whose jumbo chompers can bite through anything (“Gertha Teeth”); a hairy beast of a bloke (“Wolf Man”); a scaly serpent charmer (“Evra the Snake Boy”); a gal with the power to re-grow appendages (“Corma Limbs”); and no freak show would be complete without a bearded lady who can also predict the future (“Madame Truska”, gamely played by Mexican beauty Salma Hayek). 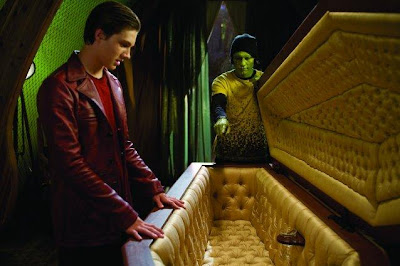 You're enticed, right? And so you should be. The Vampire's Assistant goes all-out to create a gothic fun house of a show which is far darker – and more verbally blue – than any family friendly fantasy yet. But herein lies the problem which plagues Paul Weitz's film: the weird and wonderful oddities which comprise the travelling freak show of the title are its main draw. They are far more alluring than the reputed star of the show and his independence-attaining plot arc.

Arachnid-loving 16 year old Darren (Massoglia) is perhaps a little too normal and too bland to acquire affinity from the audience, so even when he agrees to become blood-sucking gent Larten Crepsley's (Reilly) stooge and leave his family behind in order to save the life of his comatose rebel of a best mate (Hutcherson), you never really feel any sympathy. His family, also, have such a tiny role that their grief at the loss of their eldest born is never conveyed.

And so you watch, dispassionately, as Darren gets sucked into a long-battled civil war between Crepsley's more gentile vampire faction, and their darker, more violent, human-slaughtering blood brothers, the vampaneze.

But your only real interest throughout is seeing what manner of bizarre prosthetic and CG abnormality will grace the screen next.

Frankly, that really isn't good enough for a blockbuster franchise kick-starter, is it? And franchise kick-starter The Vampire's Assistant incontestably is, with Willem Dafoe's 'tached vampire general Gavner Purl and rotund curiosity Mr Tiny (Cerveris) servicing the story only by hinting at future events which, sequel-pending, we may never witness off the page.


In a CR@B Shell: Creepy, kooky and all-together loopy, there's definite fun to be had with The Vampire's Assistant, but it's plain to see that the main attraction is far less entertaining than the Cirque's sidelined sideshows.
aaaaa
Created by ~ CR@B Howard ~ at 15:46