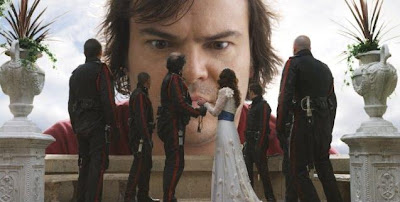 Jonathan Swift's social satire of the 18th century masquerading as a (fantasy) travel guide is one of my favourite books of all time: it's witty, layered and ingenious. Three accolades I most definately cannot grace this 21st century reimagining with. I can think of three other words right off the top of my head, but publishing them would probably get me banned from blogspot. Yes, ladies, gentlemen and Lilliputian's; Gulliver's Travels Jack Black-style really is THAT bad. And then some.

Black's character may be called Lemuel Gulliver, but he's playing to type and rolling out “Jack Black” yet again; an unmotivated layabout loser whose only good quality is his charm. This time he's one of the “little people”, the mail man at the New York Tribune who has a huge crush on travel editor Darcy (Peet). Going for broke, he plagiarises a travel story and bags an assignment to the Bermuda Triangle, only for his boat to get sucked into a giant cylinder of water and for him to awaken in a land of real little people: Lilliput.

To say this is a loose adaptation is simultaneously generous and wide of the mark: Rob Monsters vs. Aliens Letterman's film sails so wide of Swift's story that it's sometimes easier to disassociate from what should be happening and just accept what is happening (like Darcy coming to Lilliput, Gulliver's pudgy stomach “rebounding” cannon fire, the Lilliputian's having endless resources to build him a condo, coffee maker, theatre and replica model village). 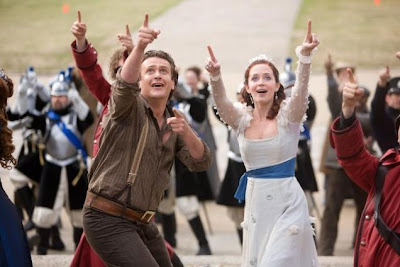 There are all of two semi-faithful scenes (Gulliver being tied down upon his arrival, and his hero-making “splash” of inspiration) and one of them feels shoehorned in for necessity's sake. The other - saving the day by pissing on the palace - is played for laughs and seemed to be the focus of ninety percent of the film's puerile advertising campaign. Basically, it's best to forget you're watching a retelling of one of the greatest books of the last 300-odd years and just go with the madness. For madness it is, and much of it hard to swallow.

Screenwriters Stillman and Stoller have no qualms with despoiling the source material in the name of “big budget family entertainment IN 3D!!”, with a cheesy song and dance number and a showdown with a giant robot in an intimation Times Square diorama. This is Gulliver's Travels in name only: The action is brought into the modern day with a plethora of eye-rolling and gimmicky pop culture references (Star Wars, Guitar Hero, Titanic, Avatar, Prince, KISS), while the second half of the four-part novel (which sees Gulliver travel on to two other lands) is completely ignored in favour of a hokey and predictable romance plot.

Finally, the film's one saving grace – its decent cast – also fail to deliver, leaving me almost nothing positive to report. The wealth of big name stars and comedy talent from both sides of the Atlantic are thoroughly wasted, with Billy Connolly and Catherine Tate – as the King and Queen of Lilliput – given little to do and James Gavin & Stacey Cordon (butler Jinx) even less, while The IT Crowd's Chris O'Dowd, as Gulliver's main adversary, the jealous General Edward, just doesn't feel right in his role: he gives the impression he is permanently on the cusp of delivering a chucklesome punchline, yet he plays the part far too straight.


In a CR@B Shell: I love Gulliver's Travels, it's just a pity that this by-the-numbers, air guitar-strumming, pop culture-riffing, goofball-makes-good Jack Black vehicle is NOT Gulliver's Travels. A disastrous, cheap and distasteful mess which makes Yahoos out of everyone who took part: A Brobdingnagian FAIL.
aaaaa
Created by ~ CR@B Howard ~ at 14:49