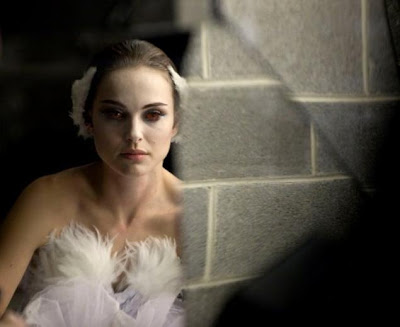 I've been squawking it from the top of the Tree of Life since The Fountain enthralled and enchanted me in 2006, but only now with the back-to-back success of 2008's The Wrestler and this year's Black Swan are mainstream audiences (and major award shows) finally starting to recognise Darren Aronofsky as an industry main player and not just an indie luminary with a flair for the eccentric and an eye for visual splendour.

Unlike the clinically clean visuals and microscopic attention to perfection that went in to creating his three-tiered love story from beyond the nebula, Aronofsky paints his ode to performance obsession in shades of grey, the screen speckled in grit and grim; imperfect. But this aesthetic preference is not to the detriment of the content, being as it is perceptibly analogous to our damaged protagonist, Nina Sayers (Natalie Portman, on extraordinary form).

Fragile but focused, stunning but sheltered, innocent Nina is the very embodiment of a dedicated dancer: performance dance is not just a hobby or a job; it’s her lifeblood, from the moment she wakes with a bone-crunching stretch of her overworked limbs, to the second she drifts off into reverie to the tones of her trinket box playing Tchaikovsky’s enchanting “Swan Lake”. 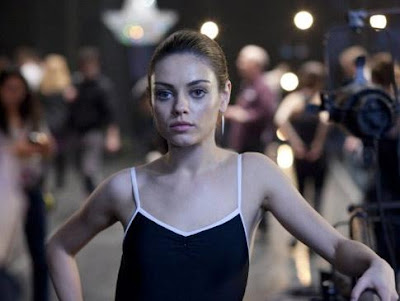 Indeed, after years of waiting in the wings of the chorus line, Nina’s dream of playing the Swan Queen in her NYC company’s updated production of said iconic Russian ballet is finally within touching distance – however, her gracefully accomplished White Swan is lacking the raw and rebellious sexuality required for the character’s transformation into the film’s eponymous shadow doppelganger.

Can Nina release the beast and channel her inner darkness or will wild-child newcomer Lily (Mila Kunis) nab the cygnet-ture role from beneath Nina’s fretful bill? With a supporting flock of fame-hungry hasslers and harassers piling on excessive expectations, it is scarcely surprising that cracks in Nina’s delicate personality soon begin to fracture and a breakdown is just around the corner.

From her bitter and smothering “stage school mom” Erica Sayers (Barbara Hershey) to her hypnotically commanding obnoxious barre-stard of a company director, Thomas Leroy (Vincent Cassel), Nina inhabits a dour and intimidating world where no one is to be trusted, not even her own reflections – and Aronofsky makes sure to litter his stage with a multitude of mirrors so as to further disorientate and distance

Nina – and us – from reality and create a world where her perception of the truth is shattered into a thousand contrasting shards.

So mesmerizingly enrapturing is Nina’s psychological decline that every frame is packed with jolting apprehension. Like a figurative ballet tutor, Aronofsky keeps his dancers always on their toes; so on edge are you at what disturbing delusion is hiding just beyond the spotlight, as Nina’s pink and fluffy childlike dream pirouettes dangerously into a sexually-fused, drug-fuelled deviant nightmare.


In a CR@B Shell: Tense, twisted and hauntingly unhinged, Darren Aronofsky’s Black Swan smears the rough with the smooth, but hidden in the plumage beneath the depravity and theatrics lies a superior and brazen mind-game masterpiece.
aaaaa
Created by ~ CR@B Howard ~ at 09:35