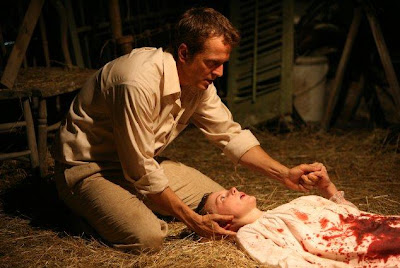 [SPOILERS] From banjo-strumming yokels (Deliverance) to deranged hillbillies (The Hills Have Eyes) and incestuous cannibalistic mountain men (Wrong Turn), Hollywood has certainly strained a lot of servings out of the “backward folk off the beaten track" these last 30-odd years. Likewise, bandwagon-jumping has seen the mockumentary-style of shaky-cam horrors comprising “found footage” recently pillaged after The Blair Witch Project, Cloverfield, [REC] and Paranormal Activity put the gimmick to such imaginative use.

The laws of equations tell us that two tired tropes an original movie do not make, but remarkably Daniel Stamm’s creepy low-budget possession flick The Last Exorcism has managed to revitalise both over-saturated clichés into a tight and effective horror which benefits from realistic characterisation, a slow-burn build-up which grips and twists, and scares which never overstay their welcome or give too much away (at least not until the final scene).

Despite a lifetime devoted to the church, popular Christian minister and exorcist-for-hire Cotton Marcus (Fabien) is having a hard time holding on to his faith, so he agrees to let a camera crew trail his every move on what he deems his last ever paycheque. Truth is, he doesn’t really believe in demonic possession, he simply delivers what the customer wants to see: smoke, mirrors and pre-recorded sound effects.

But Marcus might have to reconsider his beliefs after arriving at the Louisiana farmhouse of Louis Sweetzer (Hertbum), a man who believes his teenage daughter, Nell ( Bell ), is possessed and nightly slaughtering his livestock. Following an ostentatious “exorcism”, Nell unexplainably appears in her "saviour's" hotel room in a catatonic trance, leading Marcus and the documentary crew to believe that her possession may actually be a psychological illness. Her father, however, is having none of it and insists upon another purging of her demonic possessor. 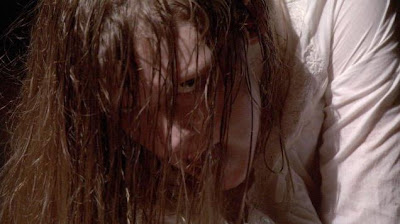 The Last Exorcism is by no means an all-out in-your-face horror. If you’re expecting a jump n’ scare every two minutes you are watching the wrong film. The first half an hour is spent quietly asserting that the main character definitely does not believe in paranormal spirits, before we witness his prop-reliant fraud in action. But even as events take a supernatural slant and your belief blossoms, writers Botko and Gurland still offer up opposing possibilities which could explain away the unexplainable…

Is Nell repressing a trauma? Has she been brainwashed by her reality-shielded upbringing? Is she pregnant? Why is her brother (Lasundry Jones) initially so intent on the film crew’s departure? Is her dad hiding a horrific family secret? The largely unknown cast are spectacular at breathing life into their motive-driven characters; they feel like real people who are taking us along on this unorthodox journey.

The last third in particular is a cavalcade of spook-tacular shocks and reveals, forever progressing the serpentine script, and even when you think all is clarified and reason has finally returned to the world, yet another stone wall obstruction makes you do a further u-turn and head back to the Sweetzer’s farm for one more evaluation into their old school

The abrupt and all-too-definitive conclusion does blow the lid off of all the film’s previous subtleties in spectacular fashion, and some viewers will be unimpressed by how the mystery is yanked out of our hands, but there is something to be said for the brave and unexpected direction the film takes, and a second viewing will highlight clear pointers throughout which may otherwise have spirited past.


In a CR@B Shell: The final reveal may give too much away, but that doesn’t divest all that precedes it of delivering smart shocks in a tight script which bends and twists like a girl possessed. Whatever you believe, The Last Exorcism is a devilishly effective genre flick.
aaaaa
Created by ~ CR@B Howard ~ at 11:05