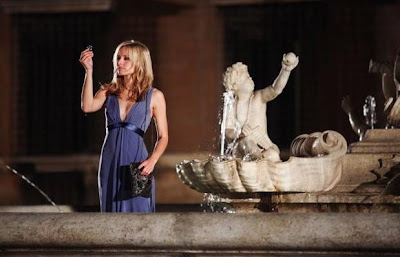 Unclouded by my unrequited teenage crush on Sarah Michelle Gellar, I can now truly appreciate how god-awful her whimsical 1999 romantic comedy Simply Irresistible is. A magical crab (no relation!!) enchants a struggling chef's culinary concoctions, charming the taste buds of a handsome big-shot executive, who hires her to cater an upcoming reception. Seriously, what the shell Buffy?!

Eleven years later and deja vu strikes: Kristen "Sarah Marshall" Bell, another adorable blonde kick ass Hollywood starlet who made her name in an iconic small screen role (Veronica Mars), has gone ahead and made a similarly flaky filmic faux pas. When In Rome is a woe-mantic chuckler showered in a sickly fantastical glaze.

Bell plays Beth Martin, an impossibly-still-single Guggenheim art curator who's married to her job after one too many dating disasters. That is until a trip to the city of lurrrrrrrve for her little sister's (Alexis Dziena) shotgun wedding leads a drunken and despairing Beth to pick coins from the "fountain of love" and consequently be hounded by the obsessively irrepressible suitors whose “wish for happiness” she has nabbed and now keeps in an ornamental bowl in her living room. 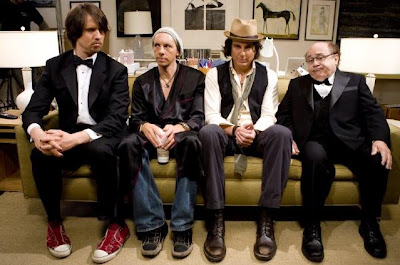 Will Arnett, Jon Heder, Dax Shepard and Danny Devito play the quintet of loser-droolers who follow Beth back home to NYC for a chance at her heart. They're all freakishly bizarre, unrealistically over-stylised and totally dislikeable, all except for suitor number five, that is: the charming and chiselled Nick Beamon (Josh Transformers Duhamel), who just so happens to be embarrassingly clumsy. I'm not entirely sure why, it certainly doesn't work if it's for comedic effect. There's no question of who Beth will fall for, but does Nick really love our cold-hearted curator, or is he spellbound until his coin is returned to the Roman fountain?

I know When In Rome isn't meant to be a taxing, head-scratching mystery, an epic love affair for the ages or a deep social satire of our times; not every film ever made has to be a masterclass in Oscar-baiting glory. Some films are simply made to entertain. Regrettably, When in Rome fails even at that: a lightweight and cutesy rom-com it may be, but I can't image even the easiest-to-please tweenager would be bewitched by this lame turkey of a misfire. Learn from my young and deluded ways, CR@B fan

s: no matter how easy on the eye the lead pair may be, this film is not simply irresistible

The “comedy” is juvenile and over-egged (Beth being unable to smash a ceremonial vase at the wedding; Nick's farcical bungling; an Italian mini being driven indoors like friggin' Brum!), the plot is achingly generic (one look at the poster/DVD cover-art will save you 87mins of your life) and the stereotypical characters so blatantly geared towards learning moralistic lessons that the whole thing feels excruciatingly contrived.


In a CR@B Shell: Ditzy, mawkish and so awkwardly unnatural that you're more likely to heave than fawn over this saccharine-sweet disaster. When in Rome, do as the Roman's (and the level-headed cinema-goers of the world) did and avoid this terrible, terrible flop.
aaaaa
Created by ~ CR@B Howard ~ at 13:02