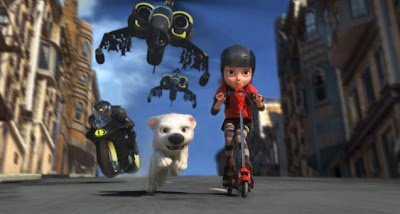 On the surface, this hyper-modern tale of a genetically enhanced superdog who can shoot lasers from his eyes, outrun speeding locomotives and bark loud enough to decimate motorways, sounds like a radically cool sci-fi twist on Disney's routine talking animal 'toon template.

But don't start yapping for joy just yet, folks, because unfortunately Bolt fails to reinvent the (hamster) wheel like its quirky premise promises. After a refreshingly erractic – and dare I be so complimentary? Avant garde – double bluff opening which triumphantly pulls you in two completely opposing directions, once the bombast has settled down you soon realise that you've seen this story a thousand times before.

You see, our eponymous pup (Travolta) may be a superstar, but he's only a superhero in his own mind. For Bolt is actually the lead in an action-packed hit TV show, but the powers-that-be behind the camera have made the curious decision to keep the truth of their scripted operation from their cute-but-courageous four-legged star, in order to extract a more realistic performance from their cash canine. I've heard of method acting but this takes the (doggy) biscuit!

Naturally, this causes no end of hassle in making sure that Bolt truly believes in this make believe reality where he fights off mysterious helmeted henchmen in his quest to take down his evil green-eyed nemesis, Dr Calico (McDowell), even when the cameras aren't rolling.

But when the deluded dog is accidentally let out of his trailer and separated from his co-star and young human owner, Penny (Cyrus), he is forced to confront the disheartening truth and comprehend his own mortality as he makes his way back to the Hollywood film lot he calls home through a real world which is so much more terrifying when you aren't the invincible hero you thought you were. As you would expect, lessons are learnt, truths are told, faiths are regained and self-referential parent-pleasing quips are fired off, as Bolt treks from city-to-city in loyal search of “his person”, accompanied – as is the convention in these matters – by a couple of lovingly misunderstood sidekick “outcast” critters.

Meet Mittens, a cynical, de-clawed alley cat, and Rhino, an overweight TV-obsessed hamster in a transparent exercise ball. Mittens provides Bolt with the no-nonsense reality of his predicament, while dreamer Rhino is noteworthy only for his over-use of the word “awesome” (which, ironically, is anything but). He even hilariously (sic) evolves it into “be-awesome”, which is a whole syllable easier to say than 'beyond awesome', except it makes absolutely zero sense.

Annoying word use aside, the crux to Bolt's success is that once the high concept disguise is stripped away from this slick pup, all you are left with is just another syrupy sweet rite of passage Disney clone, straddled with the added disadvantage of requiring even more of a stretch of your imagination than usual.

The scriptwriting team don't exactly help themselves either by seemingly being unable to make up their minds regarding a rather major plot point. Is Bolt the biggest and most easily distinguishable celebri-dog since Lassie with billboards and merchandise in his image, or is he just another mutt with a lightening bolt painted on his fur who is not recognised by pigeons and gets thrown in the dog pound without a glance at his Hollywood engraved dog tag? Furthermore, if he's such a valuable asset to the TV netwo

rk, then are we really supposed to believe that when he goes missing, the best advertising they can muster is Penny's crudely handwritten A4 poster?

No, I'm not barking mad (just a stickler for pedantry), and yes, I'm well aware that I'm looking far too deeply into a light-hearted family-focused animation, but as even the in-film executives at the Hollywood television studios understood: consistency helps build a believable universe, and without it, you're completely boned.


In a CR@B Shell: “Be-awesome” on the outside but less-than-pedigree on the inside, Bolt fails to innovate from Disney's rigid tradition, despite a wicked hook which sadly tails off after five thunderous and unconventional opening minutes. Doggone it.
aaaaa
Created by ~ CR@B Howard ~ at 04:57