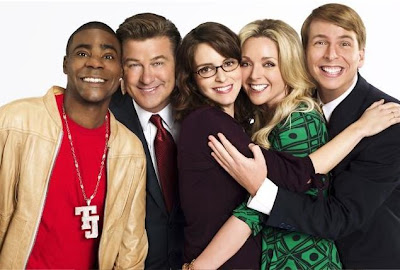 There simply aren’t enough hours in a day to watch every television programme you enjoy – even if it is only 20-something minutes an episode. And so you find yourself with a backlog of “must watch” series’ you promise yourself you will catch up with one day, perhaps on DVD. After all, it’s so much more time efficient to speed through a bulk of say, four episodes at a time, instead of waiting a whole week for each new bitesize instalment.

Thank heavens, then, for television service BT Vision (you can mail me the cheque, guys), which offers such a vast back catalogue of programmes that you can easily – and cheaply – catch up with all the shows that got away. It certainly beats shelling out for boxsets which you may only watch once.

And so it is that I have finally revisited the second season of the Tina Fey masterminded, network-based situation comedy 30 Rock, which first made me chuckle when I caught Season One episode “Up All Night” late at night on Channel 5 some three years ago. For those that have yet to watch the show, imagine Aaron Sorkin’s brilliant-but-underrated Studio Sixty at the Sunset Strip mixed with the quirky tomfoolery of Scrubs (at its Zach Braff-starring peak, not in its heinous Med School reinvention), and you’re in the right general studio lot. 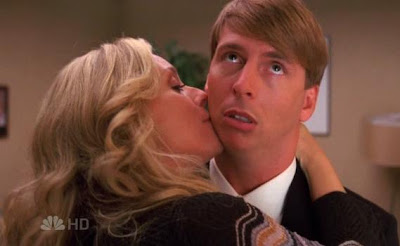 Creator Fey – who loosely based the series on her experiences working on popular variety show Saturday Night Live – takes the lead role as live sketch show TGS's head writer Liz Lemon, who must daily contend with a myriad of inflated on set egos and studio interference from network executive Jack Donaghy (Alec Baldwin), whilst trying to bring her vision of light entertainment to the air. Inevitably, things rarely go to plan, but it's hilarious and compulsive viewing all the same.

The offbeat sitcom’s ensemble cast really hit if off well, with most of the humour derived from their larger-than-life character clashes. Tracey Morgan plays Tracey Jordan, an extreme and demanding loose-cannon extension of himself, whilst Ally McBeal’s Jane Krakowski plays Jenna Maroney, the fame-hungry original star of the show whose nose is put out of joint by Tracey’s arrival. Special note must also be made of downtrodden page Kenneth Parcell (Jack McBrayer) whose innocent and undeterred joy at carrying out the most mundane tasks is a delight to behold.

The 15 episode sophomore season (cut from 22 because of the 2007/8 Writer’s Strike) continues in much the same light-hearted vein as the terrific first run, with the opening handful of episodes proving to be the most side-splittingly successful, as the team get back into the swing of production following the summer break and Jenna has to contend with shedding the excess weight she gained whilst continually eating pizza during a theatrical run of “Mystic Pizza: The Movie” she starred in.
. 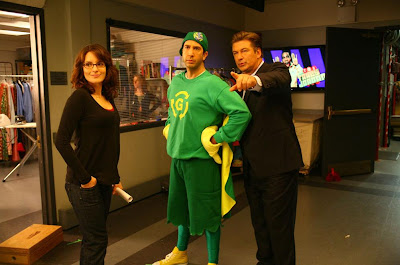 Far and away the highlight of the season for me was the David Schwimmer-starring episode “Greenzo”, which saw the former Friends star become the face of Jack’s latest eco-friendly campaign as the eponymous green-suited mascot (see pic, above), but when the star-power goes to Greenzo’s head and his planet-saving message becomes a little too preachy, it is up to Jack and Liz to nix his out-of-control ego.

Alongside David Schwimmer, Season Two sees a raft of famous faces guest-starring in the high-flying show: Jerry Seinfeld, Steve Buscemi, Carrie Fisher, Will Arnett and Matthew Broderick all plant their tongues firmly in their cheeks to take a swipe at the ridiculous industry in which they work. Unfortunately, as a result of this impressive guest cast, the pack of writers who work alongside Liz to script the fictitious TGS are all too often pushed into the background to afford the ballooning cast breathing space, with Josh Girard (Lonny Ross) in particular handed scarcely more than a couple of lines all season.

Disappointingly, I found that the comedy didn’t quite hit its mark as frequently in the latter half of the season, with episodes focusing on Liz’s hideous ex (Dean Winters) becoming a life-saving idol (“Subway Hero”), station owner Don Geiss (Rip Torn) having a stoke prior to naming his successor (“Succession”), and an unexpected pregnancy scare (“Cooter”) favouring stressy spaz-outs over snarky satire, while Tracey’s endeavour to produce a porn-themed video game (“Succession”) seemed far too implausible, even for juvenile-minded Tracey.

This is not to say that the series became less watchable – I was particularly fond of the humanizing arc which saw Jack secretly date business rival “CC” (Edie Falco) – but ultimately, 30 Rock is most successful when it leaves the drab and worrisome real-life drama to Aaron Sorkin et al and concentrates on the bright and wacky hyper-reality of working in an exaggerated industry of divas and drama queens. Combining the two contrasting styles in such a compressed space of time feels unnaturally bi-polar.


In a CR@B Shell: A second half tendency towards the serious means that 30 Rock Season Two falls just short of the frequent heights of its debut year, but at its wacky best, Liz Lemon’s adventures in TV Land still provide a bright and chucklesome antidote to all the depressing dramas which litter our screens.
aaaaa
Created by ~ CR@B Howard ~ at 11:01