“A colourful male pheasant struts the lawn, cued by the first light on the
dew-soaked grass. Dull females follow in the bird’s wake, then feign disinterest
and peck at fat-filled coconut shells strung out by Chase’s gardener” 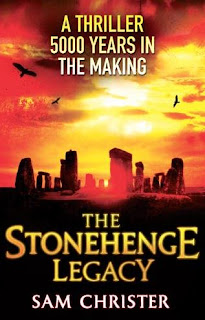 [SPOILERS] With such highfalutin and unnecessarily verbose prose just paragraphs from the narrative’s commencement, I was concerned that debut author Sam Christer’s Dan Brown-alike conspiracy thriller would be an uphill struggle of lofty and pretentious try-hard poetics. However, once the London-based writer had made his ostentatious mark upon the printed page and the story-proper revs up to full speed, I found myself becoming totally immersed in this horrible history murder mystery.

Set in the days leading up to the much-celebrated summer solstice, The Stonehenge Legacy presents to us a shady secret underworld of modern day druids who take their admiration of one of the worlds most mystical and mysterious ancient archaeological attractions to murderous heights. Following the suicide of his estranged father, archaeologist Gideon Chase uncovers a hidden library of coded diaries which lead him to disclosure shocking revelations about the clandestine group of Followers – and his own family history.

To imply that Megan Baker, the detective inspector assigned to the Chase suicide, “teams up” with the cult-uncovering protagonist (as the paperback’s cover blurb states) is something of a fallacy. Naturally, their paths do frequently cross during the on-going enquiry and she does gradually begin to acknowledge Gideon’s wild claims of blood sacrifices to the Gods, but they never collaborate to the extent Sophie Neveu and Robert Langdon do in The Da Vinci Code. Consider Blomqvist and Salander in the Millennium trilogy – minus the sex and unrequited love – and you’ll be closer to this pair’s relationship, so often are they separate and following their own leads.

The short chapters and even shorter sentences (sometimes full-stops are used where commas would have sufficed) keep the prospectively ludicrous plot at a relentlessly blistering pace, and the introduction of glamorous young American reality TV star Caitlyn Lock and her new Casanova boyfriend Jake Timberland spice up the conventional genre elements with a touch of lustful romance and open up the Wiltshire-based police investigation to an international scale.

Christer does a great job of fattening out his intrepid characters with comprehensive back stories, while the enigmatic nature of the robed and astronomically-monikered Followers allows for many a shock twist in exposing the true identities of the stone worshippers. However, I couldn’t help but feel like the earth-shattering revelations surrounding the sacred (curative?) landmark we were promised (“It is time for the truth” so teases the tagline) took a back seat to the climatic escape scenario, and DI Baker’s significance to the far-too-swiftly-resolved conclusion severely lessened once Gideon acquiesces to a rather dangerous invitation.


In a CR@B Shell: A fine and fast-paced debut, The Stonehenge Legacy is an appealing modern addition to the abundant post-Brown conspiracy thriller genre, if somewhat less of an eye-opening revelation than expected come the rather blunt crime-focused culmination.
aaaaa
Created by ~ CR@B Howard ~ at 12:35