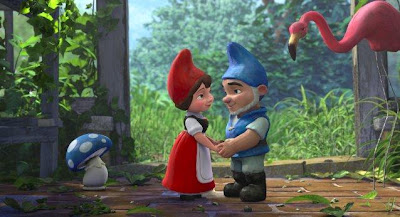 The works of William Shakespeare have been recited, reimagined and repackaged incalculable times over the last 400 years, but I don't imagine anyone (who wasn't high as a kite) has ever thought it would be a legitimately prudent idea to retell the Bard's most celebrated tragic love story using garishly decorated garden ornaments! Well, they should have done, because Gnomeo & Juliet overcomes its pun-based premise to deliver a garden shed's worth of cheeky giggles and scholarly in-jokes. And y'all thought it was going to be a disaster!

Think Arthur and the Invisibles meets Toy Story and you're on the right track, as sentient gnomes from rival Stratford-upon-Avon back gardens – numbers 2B and NOT 2B (oh, where's the strike-through option when you need it?!) Verona Drive – feud over their different coloured headgear. But when blue-hatted Gnomeo (McAvoy) and red-hatted Juliet (Blunt) inadvertently fall head over fishing rods for one another, can their doomed love survive covert graffiti sabotage and high-speed lawnmower races? 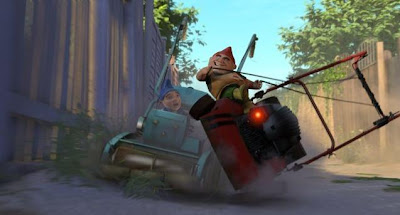 It sounds as corny as a flying pig-shaped weather vane, doesn't it? I will admit that I rolled my eyes at the line “Let's kick some grass!” in the trailer, but rest assured that the army of writers (I count nine – and that's not including Bill Shakespeare as the inspiration behind this quasi-related retelling) raise their game far higher over the course of the animated escapades. Okay, so first and foremost it is a tragedy-averting kid's flick (Jensen's talking frog and Cumming's exotic flamingo being the most obvious panderers to the young demographic), but I was genuinely amused throughout, as the film's tongue stays firmly within its porcelain cheek.

The characters are cute, the set-up is audacious, the referential in-jokes are frequent (and dive into the Bard's plentiful canon – look out for Tempest Teapots and Rosencrans and Guildenstern Movers), but most importantly of all: the casting is impeccable. Parents will have a blast putting names to voices, particularly when Patrick Stewart pipes up in a cameo as a Shakespeare-shaped park monument ridiculing the notion that the age-old love story could possibly end any other way than tragically. Clearly he didn't see that this was a “U”...


In a CR@B Shell: Bright, camp and not afraid to take an acre's worth of liberties, but Gnomeo & Juliet is a surprisingly hilarious Brit-flavoured CGI comedy which will have you "cracking" up, provided you aren't expecting the RSC...
aaaaa
Created by ~ CR@B Howard ~ at 16:18