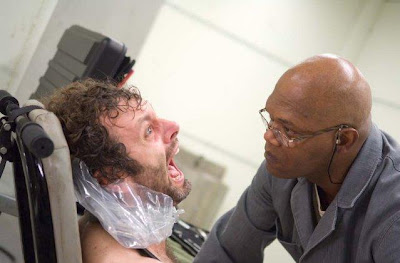 Marketed like a more severe, extended episode of 24, but closer in tone to a thinking man’s Hostel, terrorist drama Unthinkable has lofty aspirations to deliver a “punch to the gut” reaction analogous to American History X by showcasing the shocking lengths (in-)humanity will stretch to if required. Simply put, things get ugly. Very quickly.

ss fair any better with the hostage by following the letter of the law?

Peter Woodward’s script certainly blurs the boundaries better right and wrong, but it does begin to feel like it is forcibly goading controversy in its unconstitutional extremes. It is also a pity that Younger is so unemotionally resigned to his fate that you never pity the prisoner, therefore lessening the grand lesson. Ultimately, this psychological thriller thinks itself far more intelligent than it actually is.


In a CR@B Shell: Rogue government agents, terrorists and religious extremists – Unthinkable goes all out to insight debate, but in its obsession to stir as many pots as possible it strives too hard and fails to answer any of the moral quandaries it presents.
aaaaa
Created by ~ CR@B Howard ~ at 12:46