Survival of the Sickest 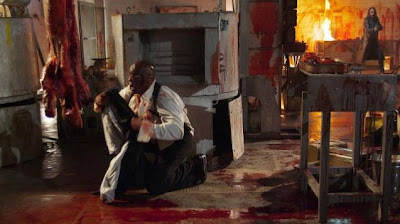 Every seven years, under the watchful surveillance of the world's richest and most unethical gamblers, the deadliest assassins on the planet converge on one unsuspecting town to take part in a brutal game of cat and corpse: elimination by death, only one will survive. The last man (or woman) standing will walk away with the $10,000,000 cash prize and the title of world's number one contract killer.

Think Death Race on foot; think Smoking Aces meets Battle Royale in a literal monster's ball – set in, ahem, Middlesbrough. The Tournament may not have the most original concept, but that doesn't stop it going out all guns raging in a blaze of visceral glory. The characters aren't as kooky as they could have been (Casino Royale's free running Sebastien Foucan and Lost's Ian Somerhalder as a finger-slicing Texan being the wildest cards), but they are bad-ass, and there's plenty of exploding heads, broken bones and executed strippers to keep the most demanding sadist cheering.
Middesborough doesn't exactly come out of the film favourably: represented as a grubby and sleepy backwater hovel dominated by sugar beet factories and a non-existent police force. There is *some* interaction with the city's population – a pair of footballing youngster's in the park, an iPod playing petrol station attendant, a bus full of dozing passengers – but the main contrast between the innocent and the immoral is provided by Robert Carlyle's drunken disgrace of a priest, Father MacAvoy, who is dragged into the mayhem when he inadvertently swallows Foucan's tracking device. 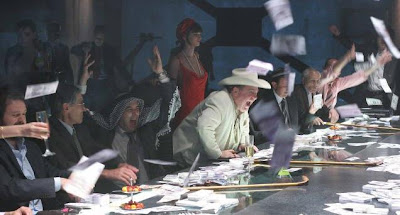 Little is made of this fretful Father's introduction into the tournament; he scarcely gets involved in any of the duals or gets his quivering hands dirty as he is continually protected by Kelly Hu's Lai Lai Zhen. Furthermore, his reprieve from certain death with mere minutes on the clock is disappointingly muted and – epilogue flash-forward aside – his character doesn't seem to grow at all throughout his incomprehensibly horrific trial by (gun) fire. How ironic that this lapsed man of the cloth is feeling lost and without purpose.

The film's emotional core is implemented by returning champion (and horror B-movie regular) Ving Rhames, out for revenge on the hit man who just four months previous murdered his pregnant wife. I liked the curveball direction this subplot took, gradually shining ever more light on the events surrounding this slaying of an innocent, however, The Tournament's two prominent and parallel stories (vicar's virtue and Ving's vengenance) do rather dominate the entire film, leaving little time for any other characters to get a look in.

The DVD cover lists the four main players, and all other bounty hunters are dispatched with so quickly that you barely remember their faces, much less their names – there's even a time-saving montage in the run-up to the third act to take the numbers from eighteen down to six! – while the CCTV-scanning gamblers remain little more than faceless entities who never even try to bride or influence the tournament's outcome, which seems unlikely given their somewhat skewed moral compasses and the make-or-break fortunes they are dealing in.


In a CR@B Shell: A brutal and relentless spraying of bullets and blood: The Tournament will turn as many stomachs as it flips, but for those twisted souls who don't mind getting their hands dirty, Scott Mann's battle royale really hits its mark, even if the story isn't as sharp as it could have been.
aaaaa
Created by ~ CR@B Howard ~ at 13:57