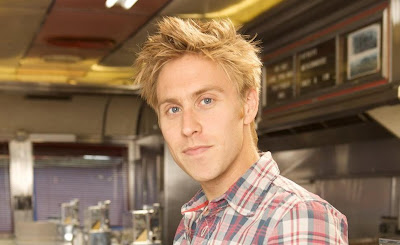 It's such a great feeling when a band/act/personality you have been following from the “early days” explodes into a household name, and you can smugly proclaim “I told you so” to all those who just gave you a blank look the last time you mentioned his/her/their name. Get you, you trend-setter! Well, that's exactly how I feel when it comes to UK stand up comedian Russell Howard.

Neither pretentious or egotistical, Russell's just a normal young guy, and that's what I like about him. He knows he's a thin, lazy-eyed average Joe, and he's cool with his lot. Even in his first performances on Mock the Week when the louder (and cruder) contestants were drowning out his meek Bristolian tones, I could see the potential, and as his voice grew more prominent, so too did his fanbase.

Back in the bygone days of November 2008, I saw him perform live at the Kings Lynn Corn Exchange. It's hardly a pub gig, I concede, but neither is it a venue which screams “Mum, mum: I've made it!” either. 27 months, two continually extended tours and two hugely successful series of his own digital TV show (Russell Howard's Good News) later, and I was sat amidst 15,000 fellow admirers in the UK's most renowned arena – former home to the Millennium Dome, the o2 – to see Russell's latest touring show: Right Here, Right Now. Mum, mum, now he's made it!

How appropriate that I should mention his mother, as Russell – being the “normal” guy I branded him just paragraphs ago – is forever bringing his family (particularly his mum and prank-loving younger brother) into his humorous anecdotes. He doesn't regale us with any swanky, showbiz shenanigans, because he has none. Here is a man who sees humour in the mundane, in day-to-day life, in Christmas with the family, in retelling gigglesome high jinks, in wacky TV adverts, in bizarre noises, in joyous audience reactions, in trips to Pets at Home. No adventure is too small or too boring to be mined for comedy gold.

Some may bemoan his occasionally vulgar language, but when compared to former fellow Mock the Week-er Frankie Boyle, Russell Howard is a pussy cat. And as much as he may rant his dislike of Twilight, Lady GaGa and Justin Bieber, there is very little animosity in his act; much like his BBC Three show, his stand-up gigs are very upbeat and good-natured events.

It's great to see a man who doesn't take himself too seriously. He knows he isn't a ladies man and is incredibly open about his sexual misadventures. He jumps, dances and wiggles his way around the stage, putting on a variety of voices with such self-deprecating glee as he re-enacts his most excruciating embarrassments – even going so far last night as to reveal a neon pink wardrobe “malfunction”.

His Lidl “home of battered biscuits” joke may have been given its gazillionth public airing (one of the problems with having a weekly TV show is people memorize your stuff), but there were so many fresh funnies on display that I could hardly begrudge the man-who-loves-a-tangent one recycled routine. And with no support act for his big gig, it was left up to Russell to carry the entire night on his lonesome, just one man, one mic, one couch and two hour-long acts of hilarity, followed by his customary Q&A encore. Russell Howard: the people's comedian.


In a CR@B Shell: Good news, everybody – Russell Howard's energetic new stand up show is as authentically engaging as anything he's done before. Fast paced and dynamic, there's something in this young man's repertoire for everyone. I told you so, CR@B fans!
aaaaa
Created by ~ CR@B Howard ~ at 14:45