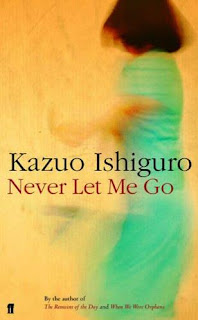 Tender and poignant in tone, The Remains of the Day author’s 2005 Man Booker Prize-shortlisted novel is technically a work of science fiction, but it’s science fiction not as we know it. Any readers with an aversion to far-fetched futuristic fantasy should definately not be deterred. For starters, there isn’t a spaceship or laser gun in sight, just a stately private school and a trip to Cromer. Yep, that Cromer. It's hardly a lightsabre duel in Coruscant now, is it?

Set in an alternate-reality where human cloning has been in operation since the war, Never Let Me Go reveals the lives and loves of three close friends as they grow up and come to terms with their pre-determined destiny – to be organ donors in the fight to cure the world’s major diseases.

Set in Britain at the tail-end of the last millennium, the novel is told from the perspective of 31-year-old carer Kathy H., who, over the course of 263 pages recounts in the most vivid detail the incidents which defined her life, from growing up in the mysterious private school of Hailsham, to moving into the Cottages with her closest friends Ruth and Tommy, and on to her time as a carer for fellow clone donors.

“The memories I value most, I don’t see them ever fading”

To think that a Japanese male – albeit one who is now a British citizen – is so proficient at inhabiting the persona and behavioural traits of this British female through the various stages of her life is outstanding; so natural and personal is the free-flowing prose, so mottled with plausible minutiae and authenticated by Kathy’s most raw feelings and opinions. You get to know so much about the narrator and her friends via their day-to-day interractions that you begin to feel like a part of the social circle yourself.

It is to Ishiguro’s credit that the novel often feels like a stream of consciousness piece – although of course it is actually most concisely planned – with Kathy recalling and recollecting countless long-cherished anecdotes and dropping in well-placed revelations which (for our benefit) gradually uncover the truth behind the fuzzy Hailsham operation, as if we too can relate to her experiences.

“I don’t know how it was where you were, but at Hailsham…”

As Kathy, Ruth and Tommy grow, so too does the tone of the novel, with sex and relationships playing a key role in their development into adulthood: arguments escalate, trusts are betrayed and resentments boil over. Kiera Knightley seems to be the perfect choice for the role of Ruth in the upcoming film adaptation, playing a character who matures into a rather snotty and sharp young woman, regularly snapping at naïve-but-endearing Tommy and sincere Kathy.

But no matter how riled up these friends get or how far they physically drift apart as their fate takes hold, the trio will forever have a place for one another in their hearts, and forever hold on to their memories of their time together. For better or worse, Hailsham – with its strict rules, stricter guardians and bizarre obsession with creative encouragement – will always cast a shadow over their lives, but it's a shadow they would never dream of dispelling. And after becoming so utterly engrossed in these tragic character's most tangible experiences, you wouldn't either.


In a CR@B Shell: Kazuo Ishiguro has crafted a fully-developed reality populated with fully-realised characters living pre-destined existences. Never Let Me Go is a compelling and moving portrait which emanates with creativity and soul.
aaaaa
Created by ~ CR@B Howard ~ at 12:56