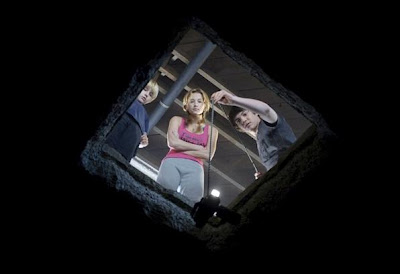 [SPOILERS] As an avid viewer of some truly twisted and gory horror films (regular readers will be more than aware that I'm a huge George A. Romero and vampire fan), I'm almost embarrassed to admit that I was genuinely spooked by some of the “sustained moderate horror” (as the BBFC classifies it) in this apparently child-friendly 12-rated adventure. Am I going soft or are 21st century tots getting tougher?

But credit where credit is due, and it is no surprise that Joe Dante, the man who transformed cutesy mogwai's into vicious reptilian beasties, is once more behind the camera for another similarly veined frightener for the whole family. But those with especially young and/or sensitive nippers be warned: despite being released theatrically in child-hooking 3D, The Hole is far more analogous to genuinely dark horrors such as The Ring than vivid adventure fantasies such as The Spiderwick Chronicles.

Initially dispirited at having to move to yet another new town, brothers Dane (Massoglia) and Lucas Thompson (Gamble) are soon engrossed in the secrets that lay hidden in a mysterious and seemingly bottomless hole they find in their new basement. Why was the chasm padlocked shut, and does its reopening have any connection to the sinister apparitions the lads have recently been experiencing? 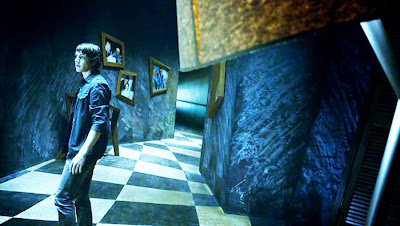 Less pristine and glossy than most modern Hollywood productions, The Hole's character-driven narrative and genuine performances from Cirque du Freak's Massoglia, newcomer Gamble and Haley Bennett as girl-next-door Julie, help elevate this chiller above the pack of derivative and schlocky genre flicks, despite reliance's upon stock clichés such as possessed dolls (Chucky), scary clowns (It) and ghostly little girls (The Shining, Poltergeist, Don't Look Now, etcetera).

As the mystery of the nightmarish visions gradually and expertly drip-feeds to reveal enlightening glimpses of the character's deepest fears, The Hole takes a bold and rather dark plunge by climaxing with a Gothic funhouse showdown between a monstrously abusive father and his teenage son, whose view is distorted by the terrifying memories he

carries of a dad he loathes and fears instead of loves.

It's a risk which more than pays off by granting hard-as-nails Dane an all-too-understandable third dimension, even if it does provide another case for why I feel this film isn't quite the whimisical fantasy lark it was advertised as. My closing argument? The blood-crying, limp-walking Annie Smith (Lord) – made even more creepy by the fact that she's played by a boy in a wig. Hole-y moly indeedy.


In a CR@B Shell: An effectively spooky shocker which admirably juggles its broad audience – kids and adults alike will be scared stiff by this dark, engrossing and fully-rounded horror.
aaaaa
Created by ~ CR@B Howard ~ at 16:42