Tears of a Clone 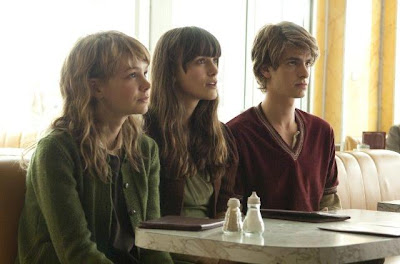 [SPOILERS] Akin to Kazuo Ishiguro’s poignant source novel (reviewed HERE), Mark Romanek’s big screen adaptation of Never Let Me Go divides its narrative into the three core stages of its central characters upbringing: Part one gives us a glimpse into the day-to-day life at the mysterious private school of Hailsham, part two sees the teenagers progress into the more relaxed living space of the Cottages, and part three deals with their brief adult lives as carers and donors before “completion” of their sole purpose: organ donation.

The film’s less than vibrant colour palette was impressively faithful to the imprisoning tone of the novel – there are no attempts to add a layer of Hollywood sheen to the drab British countryside setting or austere Hailsham compound – however I was concerned during the opening sequences of the characters as children that the film would fail to capture the many details and idiosyncrasies which made the novel such a compelling delight. Many of the book’s scenes were played out, but in such a hasty fashion as though they had to be included rather than because the director wanted them. 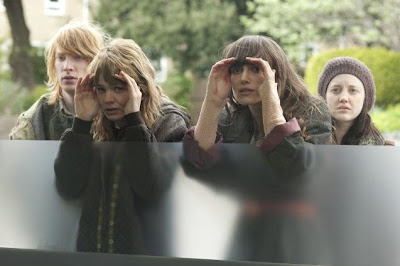 Fortunately, as soon as the children matured into the lead actors, my anxiety faded and I really began to engage with the three friends – Kathy (Mulligan), Ruth (Knightley) and Tommy ( Garfield ) – and their depressing pre-determined path. Much like the grey tones of the landscape, the actors were sensational at discarding their glamour and really embodying these sad, uncertain husks of humanity. Garfield , in particular, completely gave himself over to naïve but kind-hearted Tommy’s nuances.

A lot of people have queried why the conditioned students accept the inevitable and don’t escape the donor system when they leave Hailsham and move to the Cottages, particularly since they have attested to having souls and free will of their own. This is more a “plot hole” (for lack of a more fitting phrase) with the novel than the film, and Alex Garland’s script does attempt to give a visual (if not spoken) explanation in the form of the bracelet detection scanners seen throughout the character’s stages of growth. Big brother is always watching; it is even next to Kathy’s front door as she leaves for the hospital in her late 20’s.

Kathy’s intermittent narration aside, the film cannot even begin to delve as deeply into these characters’s subconscious as Ishiguro’s point-of-view prose does, yet for all its deficiencies, I still felt emotionally attached to the film’s unravelling drama. Admittedly the film is a slower burner, and the fated characters aren’t as radically proactive as they could/should have been, but – maybe because I have already read the novel – I was touched by its moving depiction of life so short and tragic and unfulfilled.


In a CR@B Shell: Heartbreaking and stirring in equal measures, Never Let Me Go may not quite deliver the sumptuous detail of its source novel, but it more than makes up for its early haste by delivering a hard-hitting message through three powerhouse lead performances.
aaaaa
Created by ~ CR@B Howard ~ at 10:13