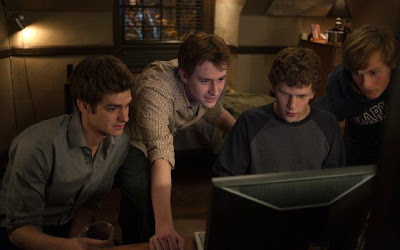 [SPOILERS] With a considerable resume which is soon to list The Girl With The Dragon Tattoo remake alongside Fight Club and Se7en, it is initially hard to see exactly what attracted director David Fincher to a low-key “talky” chronicling the troubled founding of social networking giant Facebook. What “poked” his interest? That answer, unquestionably, has to be Aaron The West Wing Sorkin's sizzling screenplay, which endows even the most humdrum of scenarios with pithy, staccato-timed dialogue.

A cursory glance south, however, will reveal a tick below a full house. So what denies the film The Times called a “Masterpiece” and Rolling Stone credited as “an American Landmark” from claiming a top score from the CR@B? Firstly, it isn't my loathing of Facebook, neither is it Fincher's camerawork, the dark but atmospheric soundtrack or the laudable acting. Everyone from lead Jesse Zombieland Eisenberg to Justin “SexyBack” Timberlake excel in this moody and murky character piece, but so good are the actors at portraying real arseholes that I couldn't fully connect to the drama. 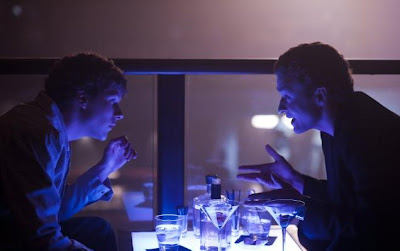 The irony isn't lost on me that the most socially inept nerd who “doesn't have three friends in the world to rub together to make a forth” could create the most lucrative online social forum of all time, but right from the first shot and opening spiel of facetious, self-obsessed discourse, gawky Mark Zuckerburg (Eisenberg) repels compassion. He's tackless, cold and arrogant, and you feel no pity for him as he is dragged through court for stealing his Harvard peer's ideas for the site, and simultaneously by his (former) best friend, Eduardo Saverin (Andrew Garfield), for swindling him out of his title of CFO.

Timberlake's Napster-creator Sean Parker is, simply put, an absolute douche bag. He may be business savvy, but he's not afraid to screw anyone over to get to the top. Saverin's girlfriend (Brenda Strong) is a jealous and scary bitch with serious issues, and even Havard's principal (Douglas Urbanski) – a man student's should revere and feel support from – is a horribly uncaring and unmoralistic toad with a superiority complex, looking down of those he should be encouraging. These aren't nice people.

So there you have it folks, for all of the dual deposition drama of the framing device, the well photographed direction, Trent Reznor and Atticus Ross's pulsing score, and the oft-chucklesome witticisms, The Social Network *just* misses out on masterpiece status due to the rude and uninvolving personalities of those portrayed. But I suppose that's the predicament with bibliographical adaptations – and at least Fincher didn't do a Braveheart and make the majority of it up. Even if the real Mark Zuckerburg is adamant he did...


In a CR@B Shell: A glossy if talk-heavy dramatization of the exceptional expansion of an internet sensation, but for all of Sorkin's superior script work, The Social Network's warring web wonders mire the award-touted film in an uneasy ambience.
aaaaa
Created by ~ CR@B Howard ~ at 14:58