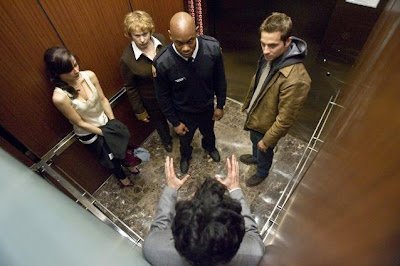 In the first in a proposed collection of “Night Chronicles”, five strangers – each with a less than honest past – are stranded together in a broken-down elevator cart within a Philadelphia skyscraper. But as the lights flicker and time creeps by without rescue, inexplicable injuries befall the restless quintet as the possibility dawns on them that one of them may be hiding their true identity… One of them may well be the devil in disguise.

From swooping and dizzying topsy-turvy sweeps of the Philadelphia cityscape to the claustrophobic confinement of the impromptu judgement, Devil is a tight and stylish little horror mystery-come-twisted morality tale. I say little not because I’m demeaning the scope of the film, but because with the credits rolling at a brusque 72 minutes, there is little room for filler in this minimalist yarn.

Not that audiences should necessarily feel short-changed, because the karmic element of the story is competently concluded and knits the various characters storylines together expertly: “Everything happens for a reason” as Ramirez (Jacob Vargas), the deeply religious security guard-come-narrator sermonizes. However, the desire for concision does at times cut short any exploration of the paranormal activity, and more could have been made of the inexhaustible concept. 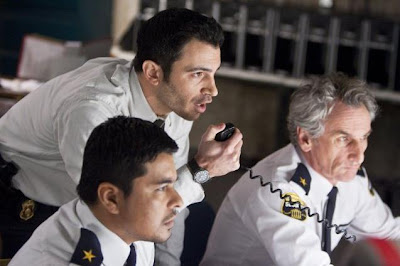 With a ghostly image of a shrieking face appearing momentarily on the building’s CCTV monitor, a bandaged figure flickering fleetingly in the match-light, and one of the imprisoned (Bojana Novakovic) being inflicted with what appears to be a bite mark, it is a shame that writer Brian Nelson didn’t aspire to explore these intriguing phenomena, beyond the obvious (but hardly lucid) explanation that the devil is among us and teasing us with his power.

Furthermore, the Prince of Darkness is often frequently referred to as a shape-shifter, but we never witness this ostentatious ability, while there is no satisfying justification to Ramirez’s inclusion in the story, other than to advocate his (occasionally derisory) superstitious myth from the sideline. But then we were already aware of his beliefs from his recurrent voiceovers… Everything happens for a reason, hey?

Despite these grumbles, Devil still provides an adequately tense hour-and-a-bit, and with the writer of the fantastic 30 Days of Night adap and the director of Hollywood reh

ash Quarantine, there’s certainly a good genre pedigree behind the camera, even if they have previously worked from other people’s properties.

But then the same is also true here, with Devil’s idea hatched from the mind of the once untouchable M. Night Shyamalan (yep Night Chronicles, geddit?), himself inspired by the South American folktale of “The Devil’s Meeting”. So, hardly an original background to the scares then, but thank the Antichrist there’s not a mood-dampening killer plant in sight.


In a CR@B Shell: With a story as tight as the lift in which the central characters find themselves cocooned, Devil is a short, sharp, supernatural thrill ride which reaches its destination before you’ve scarcely had time to acclimatise to your surroundings.
aaaaa
Created by ~ CR@B Howard ~ at 09:41