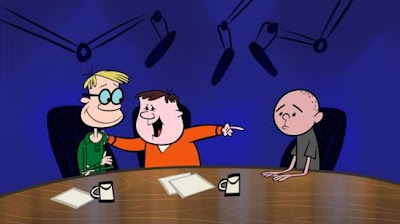 Despite being an avid listener to all the various side-splitting Gervais/Merchant/Pilkington podcasts, I was decidedly dubious when I learnt that American broadcaster HBO was adapting the trio’s first series of “pointless conversations” into a run of thirteen 30 minute cartoons. Was it an expensive gimmick which would fall flat? What would the line drawings bring to the show? Was it really necessary?

After all, the award-winning, Guinness World Record-setting, internationally famous audiobook downloads have been so unbelievably popular, I couldn’t really see the sense in redressing content we’ve all listened to countless times before. Had they been unheard recordings, I would appreciate the hype, but would the inane Karl-baiting banter still be funny on repeat? 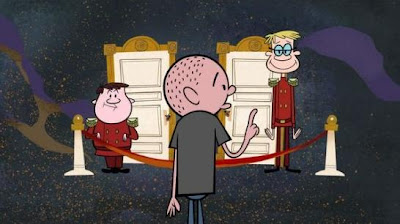 Well the answer is a resounding yes – the natural and free-flowing comedy has lost none of its giggle-inducing potency in its conversion to the screen. Indeed, the laddish jibing and uniquely “imaginative” anecdotes are frequently aided by the literal visual embellishments which make the action jump off the screen and somehow make Karl’s moronic musings and nonsensical notions – such as the 78-year-old who dies, hatching a newborn baby from her belly, much like a pip in an apple – even more absurd.

The old school illustrations – with an observable nod to the classic Hanna-Barbera ‘toons of the last half century – are vibrantly simplistic but hilariously idiosyncratic to the comedian’s physical traits. Shrieking and excitable Ricky is Fred Flintstone in all but name, whilst bespectacled Steve is as goggled-eyed and gangly as in the flesh. But the piece de resistance is undoubtedly Karl, with his “head like a fucking orange” and hang-dog expression; perfectly rendered as the glum insect-loving gimp he is.

Admittedly, despite the diverse plethora of subjects the lads cover, it’s not exactly philosophical, high-brow stuff, but then neither is the colourful, playground-worthy natter (“Chimpanzee that? Monkey News!”). Yet The Ricky Gervais Show succeeds in bringing a puerile grin to even the sternest of faces – and now you don’t even need an iPod to be in on the phenomenon. Roll on series two!


In a CR@B Shell: New format, retro look, same jokes; HBO’s belated animation isn’t going to convert any new fans to the controversial comedian’s particular sense of taunting humour, but it does invite repeat viewings by the podcast’s millions of fans – and it holds up remarkably well. Chimpanzee that?!
aaaaa
Created by ~ CR@B Howard ~ at 11:56