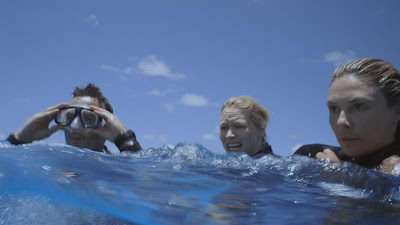 Despite the honking great fin and obligatory Jaws-referencing pull quote which grace the cover of Andrew Traucki's second film (and second water-based thriller), the Great White killing machine which plagues and plays with the troubled holiday-makers in this Australian survival thriller doesn't actually show up until over 43 minutes in – that's more than halfway through the film! But then, The Reef is based on true events, so the auteur's restraint in not diving straight to the shark-shaped money shots does aid the realism factor.

Of course, it is no doubt also a monetary issue, given the tight budget the low-key crew were working from. But that only makes the ever-present tension bubbling under the surface all the more impressive, as the capsized comrades make the difficult decision of whether to stay atop their sinkin' n' driftin' yacht or risk their luck in the deep blue sea and swim for the safety of land.

Effectively filmed by splicing together the close-up, shaky-cam footage of the water-treading actors with real shark shots and a minimum of post-production giggery-pokery, The Reef delivers the requisite jolts and scares despite a rather obvious tragedy-tinged plot (anyone who has seen Open Water or Adrift will know exactly what to expect). Nevertheless, the harrowing ordeal still leaves you thankful to be on dry land.


In a CR@B Shell: Chilling and authentic, The Reef may not revolutionise the underwater predator genre, but it stays afloat admirably amid a school of bigger-budgeted beasties.
aaaaa
Created by ~ CR@B Howard ~ at 17:28