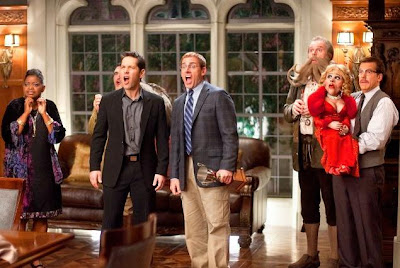 Bandwagon-jumping, idea-nabbing Hollywood remakes of cult foreign language films are always at risk of missing the je ne sais quoi which made the originals so exceptional, more interested are they in racking up the A-list stars and splashing the budget on extravagant spectacle. But Jay Roach’s adaptation of Francis Veber's Le Dîner de Cons (1998) was in particular danger of falling flat on its identity-stealing face, given the delicate nature of the French flick’s farcical comedy.

If screenwriters David Guion and Michael Handelman were too gentle on the mean-spirited jibes they would be accused of undercooking the ludicrously disreputable premise, but if they went too far with the pointing and laughing they would tout controversy for picking on easy targets. Consequently, they served up a Dinner which was neither too hot or too cold; playing up the weirdness factor for easy laughs, but downplaying the discrimination by making everyone a schmuck.

Paul Rudd plays mild-mannered Tim, a promotion-desperate business man who is invited to a corporate dinner with a difference. Each employee must bring a “special” guest to the company’s annual “Dinner for Winners”, in a bid to impress the snootily bourgeois executives with the biggest buffoon they can find. See, I wasn’t joking when I used the words “ludicrously disreputable” and “mean-spirited”. 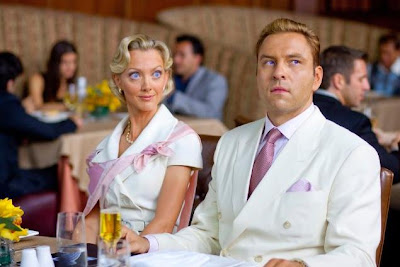 Enter Date Night’s Steve Carell as timid IRS agent Barry, a bespectacled, dead-mouse-diorama-making easy target in an anorak and slacks. A man who – for all his most well-meaning intentions – leaves a trail of utter chaos in his wake. Tim believes Barry is the perfect guest to help him win promotion from his vile, bullying boss (Bruce Greenwood), but over the course of the next 24 hours, simpleton Barry first dismantles Tim’s life, then wins him over with his kind heart and naïve virtuosity.

Predictably, the tasteless dinner provides the menagerie of “idiotic” guests – a blind fencer, a vulture lover, a pet psychic, a beard-growing champion – a chance to turn the tables on the sniggering bigots who look down on them. But for all of the over-the-top absurdities which befall the hapless characters, Carell evokes a sympathetic light on sad sap Barry, and you never catch yourself laughing at him, only with. As such, Dinner of Schmucks never offends like it might so easily have done, with every character coming off as unhinged as any other.

On a final note, the film's comedic cast is particularly remarkable, given its eccentric mixture of cross-Atlantic talent, with Rudd, Carell and The Hangover's Zach Galifianakis rubbing shoulders with the UK's very own David Little Britain Walliams, Chris The IT Crowd O'Dowd and Lucy Vexed Punch. French-born cutie Stephanie Szostak and New Zealand's Jermaine Clements continue the multi-culturally flavoured platter, while the latter's wide-eyed Flight of the Conchords co-star Kristin Shaal also makes a foreseeably kooky turn. But then kooky is the dish of the day at this Dinner.


In a CR@B Shell: Sympathy replaces cruelty in this lightweight remake which revels in its zany ensemble of Schmucks and makes fools of us all, so at least we don't feel quite so guilty about having a giggle.
aaaaa
Created by ~ CR@B Howard ~ at 13:33