Rude Slob and the Dweebs 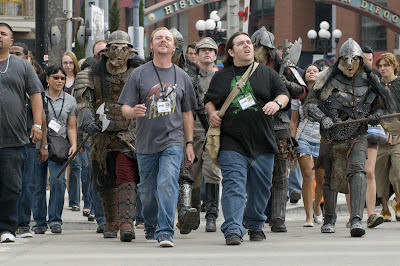 Simon Pegg and Nick Frost are geeks. Big time geeks. And proud of it. They’ve never been afraid to wear their obsessions and influences on their branded T-shirts and pack their screenplays full of more nods and winks than a Paul W. S. Anderson cliché-fest (see HERE), but without alienating – oooh, I made a funny – the cool kids. I know all too well I’m not one of those fly boys, because I was chuckling away at even the most trivial sci-fi references in their latest comedy romp Paul.

Paul is an alien. He looks just like you’d expect an alien to look: large domed head, bug eyes, a gap where a nose should be and a frail grey body. But what you may not expect is that Paul is a rude, English-speaking stoner with a penchant for bad language. Despite playing an alien, Seth Rogen voices the extra tourettes-rial with little adjustment to his usual loutish, lazy persona. It takes some time for this incongruity between voice and character to sit comfortably, but once it does you’ll be giggling away like you’ve shared a toke yourself.

The Shaun of the Dead duo play Graeme and Clive, two genre-obsessed BFF’s who follow up a trip to the San Diego Comic Con with a road trip around America ’s most illustrious alien hot spots. Witnessing a late night car crash, the pair investigates to make sure the driver is uninjured, and it is here they pick up a third buddy who quickly invades their space (I’m on fire today!!) and joins their cross country campervan excursion. 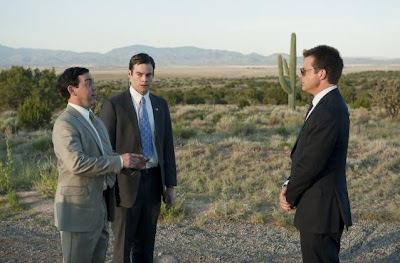 You see, Paul has escaped from Area 51 after 60 years of scientific examinations and helping influence some of the film industries biggest names with realistic Martian storylines (this inspires a hilarious flash back to an early ‘80s phone conversation between Paul and a certain Steven Spielberg, who needs some help with a little project called ET). But now the little grey man has out-lasted his usefulness to the government, and he eschews their plan to dissect his brain by doing a runner.

Now the trio of social outcasts have a host of special agents (Bateman, playing against type), less-than-special agents (Hader and Truglio), homophobic truckers (Koechner and Plemons) and the disgruntled daddy (Carroll Lynch) of a Christian gal (Wiig) they inadvertently kidnapped on their tail as they attempt to get Paul to the pick-up point where his mothership will come to collect him.

The in-jokes are fast and furious (“Boring conversation anyway”, “Where we’re going you won’t need… teeth”), the humour laddishly dumb, and Pegg and Frost rely far too heavily on childish amalgamated profanities to get cheap giggles, and yet Paul works. Even if you don’t know that the line “Get away from her you bitch” is ripped straight out of Aliens, you do know that “The Big Guy” (Weaver) played the iconic Ripley (right?!), and Paul is such a light, carefree and relentlessly silly caper that you’ll find something to chuckle over, regardless of your geek credentials.


In a CR@B Shell: It’s Close Encounters of the Nerd Kind as Pegg and Frost do America – and a fair bit of idol worship – in this Spaced-out road trip which revels in its genre’s obsessiveness but doesn’t kick mainstream comedy fans to the kerb.
aaaaa
Created by ~ CR@B Howard ~ at 02:39