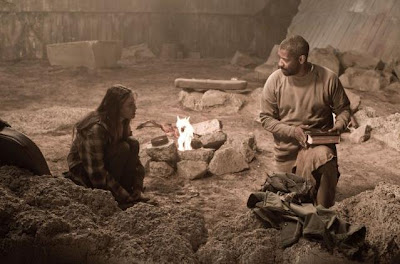 [SPOILERS] Thirty years after an unidentified catastrophic event “tore a hole through the sky and made the sun descend”, wiping out the majority of civilisation, lone traveller and exceptional survivalist Eli (Washington) is making his way through the desolate, barren wasteland which once was America , on a private pilgrimage to the West.

Arriving in a tumbledown colony made up of suspicious and scared scraps of society living under the tyrannical rule of founder Carneige (Oldman), Eli’s unwavering belief in his much-revered sole possession (the book of the title) piques Carneige’s interest in the wandering outsider, while Eli’s resistance to handing over the crucifix-adorned text (yep, it’s that book) sees the desperate despot dispatch a band of henchmen to secure the treasure long thought lost. 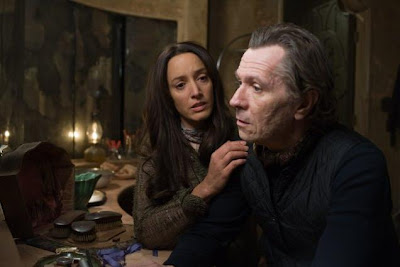 Washington and Black Swan’s Kunis – as Eli’s tagalong sidekick Solara – quickly build up a platonic chemistry which is easy to accept in spite of their multitude of differences, while Oldman sieves and grits his teeth with overdramatic “e-e-evil” menace throughout. It is hard to envisage how a man as defenceless as he has managed to coerce an army of far more able-bodied grunts into kowtowing to his vile and threatening doctrine, but clearly knowledge is power in a future where currency is irrelevant and illiteracy the standard.

The religious overtones of finding hope in the words of the bible forever hang in the film’s periphery, but it isn’t until the lead duo’s belated arrival at Alcatraz that the spiritual MacGuffin takes centre stage. But any trepidation of being preached at through the screen is diminished by the hammy supporting cast (Gambon and De La Tour, I’m looking at you) and writer Whitta’s intermittent attempts at smirksome humour.

Released in close proximity to another – frankly superior – post apocalyptic drama (The Road), The Book of Eli can’t help but feel like less of a revelation than it might otherwise have been. Strong shades of Mad Max also don’t help its cause; while the protagonist’s remarkably accomplished martial arts skills and a curious green tinge to the clouded skyline give the film a more fantastical edge which detracts from the seriousness of the character’s dystopian dilemma.


In a CR@B Shell: Not as drab as films of a similar ilk, but also nowhere near as grave, this post-apocalyptic theological action flick from the sibling directorial duo behind From Hell is a real mixed bag of genre elements which never bores, but also never quite settles comfortably.
aaaaa
Created by ~ CR@B Howard ~ at 09:31