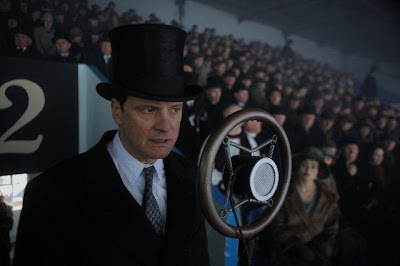 Of the two major January film releases generating the most public and critical buzz, my initially reactions could not have been more polemic: Darren Aronofsky’s psychological thriller Black Swan (reviewed HERE) could not have arrived soon enough, whilst the idea of Tom Hooper’s The King’s Speech left me cold. “An entire film devoted to a monarch overcoming a stutter?!” I thought, “I’ll be bored senseless”.

I am happy to concede I was only half right. Black Swan, as my regular readers will be aware, blew me away as expected, whilst The King’s Speech – which I eventually caught up with at the cinema last night – overcame my apathetic prejudice to deliver a thoroughly warm and enjoyable two hours entertainment.

I’m sure even the film’s strongest advocates will admit that the story of the soon-to-be-King George VI (Firth) overcoming his s-s-s-speech impediment is hardly a knockout slice of blistering action and spectacle, but then not everybody wants to see TRON: Legacy (and even those that do may end up regretting it… see HERE). And for all of The King’s Speech’s regal quaintness, there is an amiable charm to the inspiring period drama. 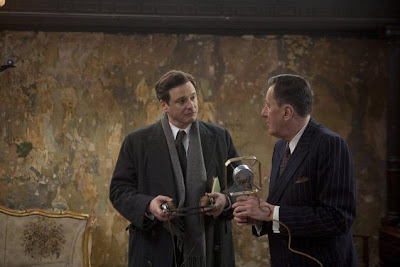 Undoubtedly the film’s success boils down to the central chemistry between Firth – who must be commended for his convincing reproduction of the Duke of Windsor’s oral hindrance – and Geoffrey Rush (totally unrecognisable from his Captain Barbossa get-up), who excels in his role as Lionel Logue, the Australian speech therapist whose unorthodox methods and unlikely friendship help shape “Bertie” into monarch material.

Their interactions are a joy to behold, as the confidence-struck and impatient Duke is softened by Lionel’s optimistic, level-headed charm (and his insistence upon equality during their time together), and the cinema audience (still over three-quarters full nearly a month after general release) were often in fits of laughter as the vocal coaching often esc

alated into sharp exchanges of humanizing banter and profanity-strewn (but non-threatening) outbursts between the likeable pair.

Even as the Royal Family, saddened by the loss of their ailing sovereign (Gambon), make difficult decisions regarding their country’s most suitable successor and Britain heads ever-closer to a second world-changing war with Germany, Tom The Damned United Hooper's film is remarkable for chipping away at the pomp and circumstance of the establishment and portraying the real man struggling with a very real problem behind the crown.


In a CR@B Shell: A simple but engaging tale strengthened by a pithy script and some truly first class acting from the award-worthy leads. The King’s Speech is a pleasant and mature feel-good film which succeeds without the need for grandeur or vulgarity, and that truly is a crowning glory.
aaaaa
Created by ~ CR@B Howard ~ at 03:14