Getting Blood from a Shan 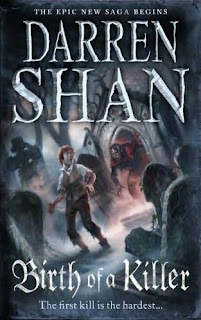 [SPOILERS] As I declared in my review of 2009's Cirque Du Freak: The Vampire’s Assistant film, the colourful big-screen adaptation was my first (surrogate) taste of the works of teen horror author Darren Shan. So while reading the serial saga-ist’s newest published work may seem like an odd aperture into his considerable canon, let it be known that Birth of a Killer is the first chapter in a new chronicle: The Saga of Larten Crepsley.

If that name sounds familiar, that’s because it is. Larten Crepsley is the vampire to whom (the fictional protagonist) Darren Shan becomes beholden in the opening book of (the author) Darren Shan’s most popular series: The Saga of Darren Shan, and given how the aforementioned filmic reworking was based upon the opening trio of books from that saga, I, too, was aware of Larten Crepsley. But Birth of a Killer (and, I would assume, the forthcoming volumes in this new collection) is a prequel to the events already told, which is why I had no quarms in diving in at the end of the beginning.

Set at the dawn of the nineteenth century and beginning when Larten is a human child on the cusp of his teenage years, Birth of a Killer wastes no time in hitting the reader hard: within the first four chapters you have already borne witness to two vividly brutal murders and a sickening display of child cruelty. Now, I understand that life back then was a world away from the unionised comfort of a twenty-first century factory – from an early age children were effectively slaves toiling twelve hour days in the most pitiful workplace conditions – but quite how suitable this kind of brutality is within the pages of a vampire fantasy novel aimed at teen readers, I’m not sure.

The book’s extreme opening certainly shocked me – and I’m 26 – but it is also important to point out that these scenes take place before any supernatural activity is even suggested; it is set in the real world and leaves more of an impact for that very reason. Soon though, as young Larten meets the vampire Seba Nile and – in a mirroring of the events in Cirque Du Freak – becomes his assistant, the novel settles down into more recognisably conventional genre territory.

Alas, conventional territory is where Birth of a Killer lingers, and even with my hardly vast knowledge of Darren Shan’s universe I couldn’t help but think that the author was playing things a little too safe. A shame, after the ultra-violent risk of the opening, but too many previously established properties – Vampire Mountain, Cirque Du Freak, Mr Tall, Murlough – are either visited or turn up along the way. An occasional reference or tip of his hat to his faithful audience I could accept, but Shan seems mired in the familiar and his latest work suffers for this lack of innovation. 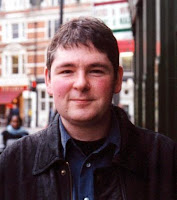 Despite a large typeface and even larger spacing between the lines, Shan manages to span a good few decades of Larten’s afterlife in the lean 252 page novel. He achieves this by splitting his narrative into four parts and using the pauses in the story as an excuse to catapult forward a great wealth of time. This never becomes confusing (the story quickly catches up with the intervening months or years) but it does begin to feel increasingly bare-boned; if Larten’s rebirth is so uneventful that great chunks can be ignored, then why bother to tell his story in the first place? Let’s hope the subsequent releases in this unfledged saga will justify their creation.


In a CR@B Shell: Quarms with the predictable plot aside, Birth of a Killer is unlikely to disappoint Shan’s clan, and it’s an enjoyable if insubstantial time-filler which doesn’t ostracise newcomers. Just don’t expect a radical or revolutionary read.
aaaaa
Created by ~ CR@B Howard ~ at 17:46