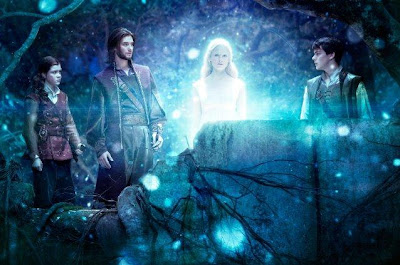 This third visit to the magical realm of Narnia sees the youngest two Pevensie children taking to the high seas aboard the eponymous royal vessel with brattish cousin Eustace Scrubb (Poulter) reluctantly in tow. Like the choppy Silver Sea on which the ship travels toward the Eastern Islands in search of seven lost lords, there’s never a dull moment in this spirited and pacey threequel.

With Michael The World Is Not Enough Apted taking over directorial duty from series kick-starter Andrew Shrek Adamson (who stays on as producer) and a wisely tighter run-time, it seems like doubtful former co-financiers Disney jumped ship on this revitalised saga one instalment too soon: the magic has returned to Narnia with full force. 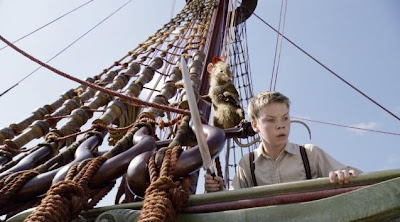 I will admit that I too was sceptical after 2005's The Lion, the Witch and the Wardrobe offered nothing that the BBC adaptation hadn’t delivered nearly two decades previous, and 2008's Prince Caspian (reviewed HERE) was a bloated and battle-heavy curiosity which favoured excess over heart, but C. S. Lewis’s allegorical series is back on track with this far stronger pirate-flavoured escapade.

Most impressively, Dawn Treader perfectly implements character growth into the finely balanced mix of humour and wonder which enthralls without over-indulging: young Lucy (Henley) is conscious that she isn’t as pretty as older sister Susan (Popplewell), brother Edmund (Keynes) is sick of constantly playing second fiddle, while comic juggernaut Eustace’s reluctance to believe in this illogical wonderland manifests itself in insolence.

With a little help from the-now-King Caspian (Barnes, Spanish inflection now absent) and his multifarious crew, a wish-fulfilling spell, a magic lake, a transformative gold bracelet – and not forgetting wisecracking and courageous mouse Reepicheep (Pegg, replacing Izzard) – the trio learn a myriad of life lessons whilst also having the time of their lives locating the Narnian lord's

seven lost swords to lay upon Aslan's (Neeson) table and defeating the haunting green mist which lures them to evil with nightmarish visions. It’s all go!

Whether it’s too late to save this (comparatively) underperforming franchise from a premature termination remains to be seen, but I certainly have faith that there are great adventures to be chronicled from Narnia’s plentiful shores – particularly given how skilfully they have tailored this rather conservative source novel into a pacey and action-packed extravaganza. And at the end of the day isn’t faith what these stories are all about anyway…?


In a CR@B Shell: A spirited and spectacular family friendly fantasy which sailed far beyond my expectations: Voyage is a bright and promising new dawn for Narnia; Lewis would be proud.
aaaaa
Created by ~ CR@B Howard ~ at 11:58