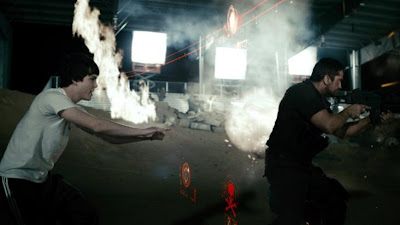 Noisome, bombastic, lurid and frenetically hyperactive; Gamer is a viewing experience not dissimilar to the Wachowski brother’s vomit-inducing Speed Racer – albeit for an older (if not necessarily more mature) audience. It’s unsurprising, really, given that this “ironic” statement on our technologically-obsessed society was hatched from the restless minds of the writing/directing team behind the chaotic Crank films. But for all its intent, Gamer is just too explicit and busy to be taken seriously.

In the near future, an ultra-violent multiplayer videogame called “Slayers” created by eccentric genius Ken Castle (Dexter’s Hall) has taken the world by storm. Gamers play as soldiers battling it out in bloody conflict to the death. But what makes “Slayers” revolutionary is that the soldiers are not pixels but real people (death row inmates to be precise) who are controlled and actually killed by the actions and mistakes of the gamers playing safe in their homes.

Gerard Butler plays John “Kable” Tillman, one such condemned avatar whose success at “Slayers” has made him a global superstar. He is but three games away from being the first I-con to be granted his freedom, but when a renegade hacker group called Humanz led by Brother (Fast Five’s Ludacris) grants Kable’s controller, 17 year old console whiz Simon Silverton (Lerman), an upgrade which allows player and avatar to communicate, Kable persuades Simon to relieve him of his control and let him have his body back. 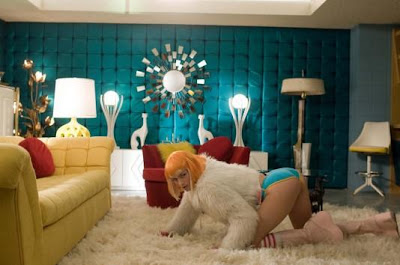 Free to roam and think independently, Kable breaks out of the deadly arena in the hope of tracking down his wife Nika (Valletta) – an avatar on a debauched Sims-like pseudo-community game called “Society” – and his daughter, in the process learning that there is more to Ken Castle’s maniacal plans for his mind-control technology than simply life-like videogames…

A dizzying amalgamation of concepts explored far more effectively in such sci-fi classics as The Matrix, Avatar, Death Race and Battle Royale, Gamer masks its triteness in an unremitting torrent of tasteless frivolity. Par exemple: a nauseatingly obese permanently shirtless male gamer called Gorge (Moore) plays – for perverse reasons all his own – as Nika, dressing her like a whore and making her spank herself and crawl on all fours in front of a player rather unsubtly called Rick Rape (Heroes’ Ventimiglia). Classy (!).

Compounding the sophistication (ahem), the agitated narrative jumps all over the place almost as rapidly as the camera swoops and spins like a kid with ADHD, so you’re constantly playing catch-up and questioning where you are, whose mind you’re in and whether what you’re seeing is reality, game play, flashback or video feed. One thing is for certain, though: Gamer is embarrassing lowbrow twaddle which quickly grows tiresome – and Neveldine and Taylor can’t control your reaction.


In a CR@B Shell: Disordered, frenzied and unsubtle to the point of vulgarity, Gamer is an exasperating mishmash of quality (if hackneyed) genre concepts lost beneath a visual assault of gaudy, offensive, multi-coloured madness. Gamer over.
aaaaa
Created by ~ CR@B Howard ~ at 04:42