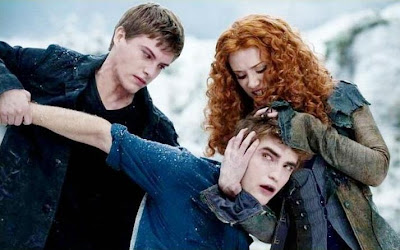 I have read a number of reviews for this third silver screen adaptation of Stephanie Meyer’s bazillion-selling Twilight saga. A lot of people – or their girlfriend’s – have opinions on it, natch. Every single one of these critical appraisals has cited Eclipse as far and away the best film of the series (so far). By no means a faultless or perfect movie, but far more accomplished than its two plodding predecessors (both of which, tellingly, had different directors). Having now watched David 30 Days of Night Slade’s vision of the teen vamp/werewolf romance, I am going to say something controversial. Brace yourselves, Twi-hards… I actually preferred Twilight (2008) and New Moon (2009). There, I said it.

No, before you ask: I have not read any of the books in the series. I have been told that I will appreciate the nuances of the films more once I have (and hopefully a myriad of questions - like why the hell the vampires seem to be made of crystal and “crack” when they are killed? - will be answered), but I refuse to believe it is a necessity; the films should stand up on their own, rather than as flashy and expensive advertisements for their prose counterparts. Besides, this isn't The Da Vinci Code we’re talking about, where countless passages of vital canonical research and Art History back story are edited out or crammed into a split-second of film in order to preserve a humane runtime; this is a teenage fantasy with vampires and werewolves.

The plot, for the unacquainted minority such as I, follows on directly from that which was set up in the previous instalments: Avenging the death of her pack mate (as visualised in Twilight), red-headed vampire Victoria (Bryce Dallas Howard, an almost imperceptible replacement for Rachelle Laferve) is in Seattle, raising an undead army of ferocious newborns to kill American High School-er Bella Swan (Kristen Stewart) and break the heart of her vampire lover, Edward Cullen (Robert Pattinson). The Cullen clan begrudgingly agree to a temporary alliance with their lycanthropic enemies in order to take down Victoria and destroy her newborn army, lead by murdered Riley Biers (Xavier Samuel), while Edward and Bella hide out. In the mountains. In a snowstorm. In a tent. 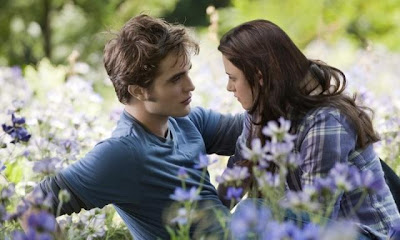 Intertwined with the conflict and action is the saga’s staple serving of romance and melodrama, as Bella is convinced she wants to be turned into a vampire to live her (after)life with Edward – yet she is unsure if, at 18 years-old, she is quite ready to marry him yet!! This may have something to do with her overprotective policeman father, Charlie (Billy Burke), who is, understandably, none-too-keen on the union, or it may have something to do with her best friend – the shirt-phobic, night-howler Jacob Black (Taylor Lautner) – who admits he too is head-over-paws in love with our everywoman protagonist. Fangs or fur? Decisions, decision, Miss Swan…

While David Slade does an adequate job with the threequel’s larger scale and more intense battle sequences (even if the CGI werewolves still don’t quite convince – and what is with them “popping” in and out of lupine form?), it is in the quieter, soppier moments that Eclipse repelled me. Yes, I know I’m neither the key demographic or gender, but I didn’t squirm this much in Twilight or New Moon. Perhaps it is the darting from dark tension to light yearning; from fighting to fawning; from Seattle to Forks; which frequently jolted me out of my engagement with the film? Furthermore, I found the scenes with Bella and Edward laying loved-up in a meadow musing on love, sex and marriage to be excruciatingly awkward (akin to many of the criticisms levelled at Christenson and Portman in Attack of the Clones), which is doubly unexcusable given the star’s real life relationship.

Actors who did impress me were Ashley Greene as clairvoyant Cullen, Alice, and Jackson Rathbone as her "blood brother” and head battle trainer Jasper. Both actors bring the requisite peculiarity to their vampiric characters, both physically and in their off-kilter delivery, even if they are sidelined far too often in lieu of the star trio. Eclipsed (ho ho!) also are the Volturi, the powerful, age-old sect of vampires who lose any menace they accrued in New Moon by spending the entire film waiting in the wings. Guided by Dakota Fanning’s vacant Jane, they come across as a coven of self-important kids, only entering the climatic battle after it is over. How noble…

Finally, a tributary story fleshing out Rosalie Hale’s (Nikki Reed) tragic death and transformation via a mournful monologue and montage seemed a redundant attempt to darken the teen love story with a controversially edgy adult tone (Rosalie was raped and killed by her drunken fiancé), merely to provide leverage to the outstandingly obvious: that Bella is making a huuuuuge mistake by wanting to sacrifice her heartbeat for an eternity with Edward. And no, before you ask: that doesn’t mean I’m siding with “Team Jacob”, either…


CR@B Verdict: David Slade doesn’t alter much to the Twilight formula in bringing the third novel to the big screen. More epic in scale but more flitting in plot, Eclipse left me shaken but unstirred by its battles of the body and heart.
aaaaa
Created by ~ CR@B Howard ~ at 09:24