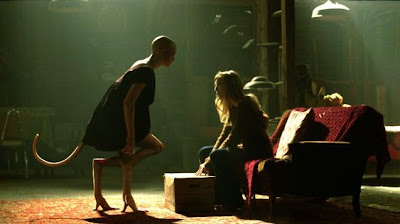 Faultlessly splicing* together the lowbrow thrills of a blood-soaked horror with the limitless possibilities of the science fiction genre, Vicenzo Cube Natali’s latest piece of visually-resplendent yet cerebrally-satisfying entertainment is a tense, shocking and fascinating creation the like of which David Cronenberg would undoubtedly be proud (if anyone has asked him, or, for that matter, if he’s even seen it).

King Kong’s Brody and Dawn of the Dead’s Polley head up the minimalist cast as Clive Nicoli and Elsa Kast, partners both in their field of genetic engineering and at home. When their corporate firm decides to pull the plug on their medicinal gene-splicing research in favour of a more profitable and less controversial direction, Clive and Elsa secretly take their work one step further and implement human DNA into their next animal hybrid… “Dren”.

As their scientific breakthrough rapidly grows and develops, so too does the swiftly evolving plot. With every scientific step Clive and Elsa conquer, a raft of ethical and moral dilemmas presents themselves: Is their research legal? Are they working out of scientific curiosity or for selfish personal gain? Could they ever reveal Dren to the world? Can they take a life which they created? Is Dren a lab rat, a pet, a child or an equal? 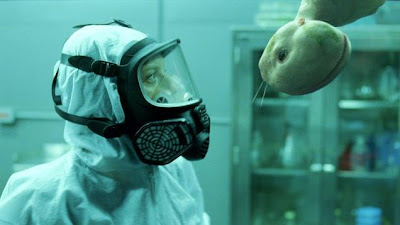 Indie director Natali implements these moral quandaries so fluidly into the pacey and progressive script that you never feel like you are being lectured at, and any inherent social commentary on the danger of crossing the line in our genetically and technologically inquisitive future never overshadows the horrifying, tense and unconventional action (yep, in both senses of the word). Also let me just clarify that, yes, curiosity does indeed kill the cat…

Brody and Polley’s performances are perfectly understated (and, thus, all the more convincing) without lacking the emotional brevity that a film as taxing and affecting as Splice requires, but Delphine Chaneac undeniably steals the show as the not-quite-human anthropomorphic experiment. She brings to the voiceless role a kind and trusting ignorance,

whilst never betraying Dren’s alien characteristics (though the wings and tail-stinger certainly help!!).

Even in the downbeat epilogue yet another innovative twist is delivered which opens up yet more room for ethical debate (and the opportunity for a sequel). You may shriek, you may cringe, you may laugh it off as ludicrously far-fetched, but Vincenzo Natali guarantees that Splice will linger in your noggin long after the credits have rolled. And that, ladies and gentlemen, is the sign of an all round damn good film.


In a CR@B Shell: A fascinatingly original, cerebrally compelling, visually entertaining and psychologically transfixing creature; Splice achieves so much on such a strict budget, without ever labouring its point or compromising its aim: a modern genre classic.
aaaaa
____________________
* Wow, I got that one in early!!
Created by ~ CR@B Howard ~ at 12:48